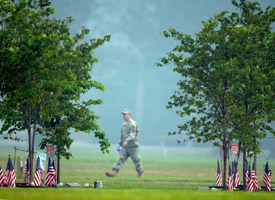 The Associated Press continues its impressive stimulus coverage with a report on Republicans who opposed the stimulus -- then lobbied for stimulus funding. "Billions of dollars worth of Defense Department stimulus money is paying for repairs and construction at military installations in areas represented by lawmakers who said 'no' to the legislation," the AP reports. Republicans respond that they can oppose wasteful spending over all and also back worthy projects.

Meanwhile, The New York Times has a great article on the difficulty of counting stimulus jobs in New York City, where Comptroller (and likely mayoral challenger) William Thompson has criticized as "puffery" Mayor Michael Bloomberg's estimates of stimulus jobs. Case in point: the replacement of ramps at a ferry terminal on Staten Island. The city government estimates that the project will create 5,000 jobs, but Rep. Michael McMahon, a Democrat who represents Staten Island, says the figure will reach only into the hundreds. (ProPublica has reported in the past on the challenge ofcounting stimulus jobs nationwide.)

A labor union in Nevada is seeking a court order to block the state from spending $10 million in stimulus funds. The Nevada AFL-CIO says the Nevada Housing Division is trying to avoid complying with a new state law that requires, among other things, paying workers the prevailing wage for weatherization projects, the Reno Gazette-Journal reports. The agency responded that it intends to comply with the law once all its provisions are in place, but that it risks losing the money if it doesn’t meet federal requirements to spend it quickly.

Not content to excel in watersports and sunny dispositions, Australians are apparently better than Americans at spending stimulus money as well. According to a study at the Australian National University, Australians were twice as likely as Americans to spend the stimulus payments they received from the government. (The study looked at stimulus checks sent by the U.S. government in 2008, under the Bush administration.) The findings were reported in the Australian newspaper The Chronicle, which adds, "Unlike the U.S., Australia has so far avoided a technical recession."