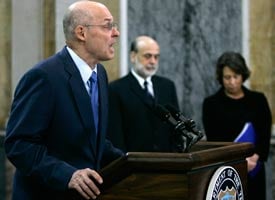 Following the example of Britain, France and Germany, the U.S. government announced a capital-injection program for the nation’s banks this morning. But compared to the British intervention, the U.S. model is quite hands off.

The U.K. essentially took control of those banks with a $63 billion investment, acquiring voting shares (as opposed to preferred shares, which are non-voting). The CEOs of the banks stepped down, and the government could even take board seats at the banks. As the New York Timesputs it, the move “creates a two-tier banking system in which the nationalized banks are run like utilities and others are free to pursue profit growth.”

By contrast, the U.S. plan has few strings attached so far. Nine of the country’s biggest banks have signed on so far (the tally: $25 billion for Citigroup, JP Morgan Chase and Bank of America; $10 billion for Goldman Sachs and Morgan Stanley; between $2 billion and $3 billion for Bank of New York Mellon and State Street).

Participation in the program is technically voluntary, but the first banks in the deal were given an offer they couldn’t refuse: The banks “had little choice in the matter,” says the Washington Post.

Bullied though they may have been, the government’s intrusion in the banks’ day-to-day operations will still be relatively light.

Treasury Secretary Hank Paulson exhorted the banks this morning not to “hoard” this new capital, “but to deploy it.” However, there is no “specific contractual guarantee” that the banks do that, reports the Post.

Furthermore, there will be some limits on executive compensation, but the jobs of the executives at the participating banks seem secure. Speaking this morning, Paulson said, “Institutions that sell shares to the government will accept restrictions on executive compensation, including a clawback provision and a ban on golden parachutes during the period that Treasury holds equity issued through this program.”

The clawback provision in last month’s $700 billion bailout bill allows the government to recover bonuses from execs if earnings were misstated. These compensation measures are stricter than the ones indicated by reporting last night, when it seemed as if the Treasury Department would only prevent the banks from crafting new golden parachute deals. Such lax requirements were already spurring bipartisan criticism.

The comparably favorable terms of the deal for the banks is the latest demonstration of Paulson’s consistent reluctance to take a stake in solvent financial institutions. By most accounts, the reluctance stemmed from ideological opposition to the idea.

A number of insiders have long supported taking stakes in the banks. Federal Reserve Chairman Ben Bernanke was an “early advocate,” reports the Journal. A senior Republican, Rep. Spencer Bachus (R-AL), proposed the idea to Paulson last month, reports the Post. Even the banks themselves have been more open to it: “Senior executives and advisers to some of the nation's leading banks pitched such a plan at various points earlier this summer,” reports the Journal.

Paulson and Treasury officials rebuffed the suggestions. As Paulson famously put it during a hearing last month, “That’s what you do when you have failure. This is about success.”

Except there seems to be consensus – judging from behavior of the markets – that the Treasury’s original plan, to purchase toxic mortgage assets from the banks, failed before it began.