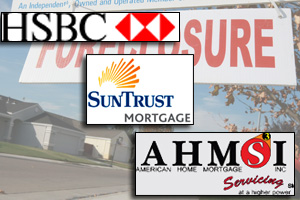 Most of the biggest mortgage servicers in the country have signed up for the government's foreclosure program, helping it cover what the Treasury Department says is more than 80 percent of home loans. The program pays participating servicers to modify loans.

We were curious as to why some of the top servicers were holding out, so we asked them. Some said they were considering joining. Others would not comment.

Among those not participating are three of the 10 largest servicers in the country and the second-biggest servicer of subprime loans, according to National Mortgage News.

Those servicers are under no obligation to offer modifications for loans not owned or guaranteed by Fannie Mae or Freddie Mac. They also are not bound by the mortgage debt-to-income ratio prescribed by Making Home Affordable, which limits monthly mortgage payments to no more than 31 percent of a homeowner's income. The Treasury has said that more than 270,000 loan modifications have been offered so far, but servicers have been slow to ramp up.

Mortgage servicers contacted by ProPublica were reluctant to address their reasons for not signing on.

SunTrust Mortgage Inc., with more than $150 billion in loans, is the holdout with the largest servicing volume. Hugh Suhr, a spokesman, said the company was still considering whether to join the modification program.

HSBC, one of the top five servicers of subprime loans, told us it was "considering the related financial, operational and customer impacts" of Making Home Affordable for customers with bank-owned loans.

A spokeswoman for American Home Mortgage Servicing Inc., which according to National Mortgage News is the second-largest servicer of subprime loans, with a subprime portfolio topping $100 billion, said it anticipates finalizing an agreement with the government "soon."

"Soon" was also the word used by a spokeswoman for Litton Loan Servicing, who said that's when the company hopes "it can formalize its participation in the Treasury program."

Three servicers -- HomEq, PHH and Flagstar Mortgage – would not comment.

Meanwhile, homeowner advocates are getting impatient. "At some point President Obama has to stop begging, pleading and bribing the servicers and require them to do it," said Bruce Marks, CEO of the Neighborhood Assistance Corporation of America, a nonprofit advocacy organization that helps homeowners refinance.

ACORN, an association of community organizers, recently organized a campaign against four non-participants it lambasted as "The Home Wrecker 4." One of its targets, OneWest (formerly IndyMac), announced last week that it intended to formalize an agreement with Making Home Affordable.

Correction, July 10, 2009: An earlier version of this story incorrectly stated that ACORN Housing organized the campaign against four non-participants. It was actually ACORN, the Association of Community Organizations for Reform Now.