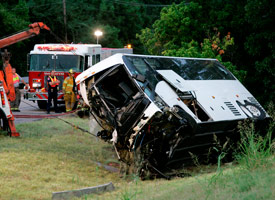 Following a fatal bus crash earlier this month in Texas that killed 17 people, the head of a federal government oversight agency for highway traffic safety said that now is the time all charter buses should have seat belts.

The bus involved in the crash in Sherman, Texas was being operated illegally by a rogue company. It was carrying a group of Vietnamese tourists to a religious festival before it rolled over, leaving everyone on board either dead or injured. According to a survivor from the Aug. 8 crash, the bus was not equipped with seat belts. During the past decade, 20 to 30 people have died annually from charter bus accidents.

National Highway Traffic Safety Administration Administrator Nicole Nason told ProPublica that rather than a regulation, it might be easier to get a voluntary agreement among the major charter bus manufacturers. But the industry has been reluctant.

"My response was and is, sure, there are a lot of difficulties and challenges involved, but it's time to put seat belts on motor coaches," she said.

Nason's stance comes 40 years after the National Transportation Safety Board made its first recommendation concerning seat belts in charter buses in 1968 (PDF) with the follow-up recommendations in 1971.

Former NTSB chair Jim Hall has been adamant about having seat belts on charter buses, recently saying that not implementing seat belts is almost criminal. He said little has been done since his sweeping 1999 recommendation to NHTSA concerning charter bus safety and that although Nason's comments are welcome, it's "too little too late."

"No one has been saying one size fits all in terms of seat belts and safety," he said, "but the recommendation has been that motor coach safety has been an orphan at the Department of Transportation and it hasn't been addressed and now we are seeing enough deaths on the highways in which it's getting their attention. The sad part is there would have been a lot of lives saved in a timely fashion if they moved forward on it 40 years ago."

Other fatal charter bus crashes such as the 2000 crash in a Nevada desert and the 2007 crash in Atlanta involving the Bluffton University baseball team have been cited for their lack of seat belts. Another one, the 2003 Valentine's Day crash near Waco, Texas, even led to a court ruling favoring the victims and citing the bus as being dangerous for lacking seat belts. A bill (PDF) introduced in the Senate last year would require passenger buses to have seat belts, but so far the legislation hasn't come up for a full vote. It has been opposed by industry-related groups such as the American Bus Association (ABA) which argues that the current safety measures are adequate.

Making the seat belt issue a voluntary agreement among the major manufacturers is an idea that needs more time and resources in order for it to even be considered, said Eron Shosteck, a senior vice president of communications for ABA.

"It's premature to even speculate about that until we have scientific data," he said. "Remember, you have to do this right the first time. We're talking about human lives."

A similar sentiment was expressed by NHTSA spokesman Rae Tyson last week, saying change in federal regulation will not be proposed until there is enough evidence to prove that implementing seat belts will improve safety.

"The industry has had 40 years to do research," Hall said.