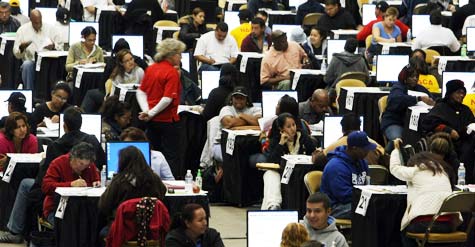 Why has the administration’s $75 billion mortgage modification program shown such meager results so far? One answer has predominated in the media over the past week: Homeowners are largely to blame. Homeowners, the line goes, just can’t seem to get the necessary documents together.

In testimony to Congress on Tuesday,  executives from JPMorgan Chase and Bank of America said a majority of the borrowers who’d entered into trial modifications were in danger of being denied permanent modifications through the program because they hadn’t submitted all of the required documents. Last week, the Treasury Department released survey results from all participating servicers showing the same trend.

But the data from servicers should be viewed with skepticism, given another clear trend: Banks and other mortgage servicers are themselves not very good at managing documents.

As Rep. Maxine Waters, D-Calif.,  put it during the hearing this morning, recounting her attempts to intercede with servicers on behalf of constituents, "Why do you lose so much?" (Waters has been pushing servicers to make loan mods, with considerable frustration, since before the program launched.)

Homeowners and advocates are full of stories of servicers misplacing documents – and have been since the start of the program, which was designed to curb surging foreclosures by giving mortgage servicers incentives to modify troubled loans. Believing the servicers’ explanation of what has gone wrong "assumes that the servicers aren’t losing things and are accurately telling borrowers what they’re supposed to send in," said Diane Thompson of the National Consumer Law Center. "There’s no evidence to support that assumption."

"It may well be that they believe they have" the documents, said Irwin Trauss, a lawyer who supervises the Consumer Housing Unit of Philadelphia Legal Assistance, but "they just can’t find them."

As we reported earlier this year, judges overseeing bankruptcy cases have often bluntly criticized mortgage servicers for doing a messy job. They’ve "not done a very good job of keeping the records," one federal California judge told us.

A Treasury spokeswoman agreed that the servicers’ track record raised questions about whether borrowers really were largely to blame, adding, "We believe the onus is on servicers to improve conversion rates."

Some servicers acknowledge there’s a problem. In testimony to Congress on Tuesday,  a Bank of America official, Jack Schakett, listed several factors as contributing to the document difficulties. Among them were "ineffective communications with customers" and "shortcomings in document maintenance."

Under the program’s guidelines, servicers initially approve borrowers for a three-month trial period. If the homeowner makes the payments on time, sends in the required documentation (verification of income, etc.) and meets the program’s criteria for eligibility, the servicer is supposed to convert the trial modification to a permanent one at the end of that period.

The administration has said that it aims to help 3 million to 4 million homeowners. So far, about 680,000 borrowers have started trial modifications. But as of the end of October, only about 10,000 mods had become permanent.  Treasury will reveal the numbers for November on Thursday.

The  government has being trying to address the problem. This fall, the Treasury extended the trial period from three to five months in reaction to servicers’ difficulty in completing the process. Finally, last week, Treasury officials announced a new initiative to goad servicers to produce more permanent modifications.

But the extensions of trial periods, coupled with servicers’ tendency to communicate poorly, has created its own problems and ample confusion. For borrowers who made their three monthly trial payments on time, "it’s not entirely clear what you’re supposed to do," said Thompson.

Lynn Alexander of Wisconsin faced just that situation in September, when the third month of her trial period arrived. Alexander told ProPublica she’d submitted all the required documents, but when she asked her servicer, PHH Mortgage, why she hadn’t received the final modification, she was told a permanent modification wasn’t guaranteed and that she should continue sending in payments. (No mention was made of a new five-month period.) She then told the company that she wouldn’t continue paying until she received a permanent modification. PHH did not respond to our requests for comment.

"I didn’t want to send them a payment and then have them say, ‘No, we’re not going to modify your mortgage,’" she said. "That wouldn’t have benefited me at all. It would have just put money in their pocket."

So Alexander stopped paying. It’s unclear what the result will be. According to the Treasury, servicers recently reported that about a quarter of borrowers did not make all of their trial payments. Alexander’s case raises the question of whether others defaulted because of a lack of clarity about the outcome, not because they couldn’t make the payments.

Alexander says she’s heard nothing from PHH since she stopped paying. "I can make the payments," she said. "I just wish they’d send the paperwork."

"It’s just been a nightmare," Alexander said. PHH had already started foreclosure proceedings on her home before she began the trial mod, she says, and "I keep waiting for someone to come knocking on my door and say, ‘You’ve got to get out in 10 days.’"

We’ve been reporting on the Obama administration’s program of loan modifications, and we want to hear from homeowners who are applying for one. Tell us your story