ProPublica has been covering the government’s foreclosure relief effort since the Obama administration launched the program in the spring of 2009. This week, ProPublica is checking back with some of the homeowners we’ve profiled over the past year. Some homeowners received modifications that prevented foreclosure, some are still in limbo and others have moved on.

Frances Gomez, Still Not Back in Her Home Despite a Mistaken Foreclosure

In a story last May with USA Today, we wrote about how disorganization at banks was causing premature or mistaken foreclosures—a problem that continues to be prevalent. The story highlighted the case of Frances Gomez, who lost her home in Tempe, Ariz., while she was still in the modification process. At the time, Bank of America told ProPublica that it had made a mistake—that it improperly denied her modification and that it would unwind the foreclosure to make things right. Now, eight months later, Gomez is still not back in her home.

Gomez needed a loan modification because her hair-salon business took a sharp hit in the recession, making her fall behind on her mortgage. After ProPublica’s inquiry, Bank of America bought back Gomez’s home two weeks later, but Gomez still faced the same problem with affording her mortgage payments. She also owed about twice as much on her mortgage as the home was worth.

Bank of America offered Gomez a loan modification, but it actually increased her payments a bit and added an extra $50,000 in accrued interest and fees to her principal balance. Gomez says she couldn’t afford those payments then, and she can’t afford them now. She wants to move forward, but she says she can’t get a hold of the attorney representing the bank.

For now, the home is sitting empty—Gomez says she only recently learned that the house was back in her name, and she doesn’t want to move back in until she has a loan modification that resolved her problem in the first place. As an unintended consequence, Bank of America now says that Gomez doesn’t qualify for help through the government program because she doesn’t currently live in the home, a requirement of the program. It was her primary residence before she was evicted.

Bank of America says it needs updated documentation from Gomez to consider reducing the amount she owes. A spokeswoman said the bank didn’t know Gomez was trying to reach its attorney and will contact her about the documents and to “and address any questions she may have.”

In January we documented the story of Nathan Reynolds, a homeowner in the Chicago area who was denied a loan modification because Chase said his hardship was temporary. The reason Chase says it wasn’t permanent: Reynolds said he was optimistic that the economy would rebound.

The denial came despite the fact that the program guidelines make clear that those with temporary hardships can still qualify. When ProPublica asked about the denial, Chase said that Reynolds didn’t qualify because he had no drop in income. Reynolds couldn’t believe it, but he resubmitted documents showing his income fell by 50 percent. When we published the story, Chase told ProPublica it would review his new paperwork.

Since then, Chase denied Reynolds two more times, saying he made just $1 a month and that he didn’t have an adjustable rate mortgage, both of which Reynolds disputed. He tried to challenge the analysis again at Chase but was told that he had no more venues to pursue. His only option, he was told, was to apply all over again. It had been over a year since he first applied, and Reynolds said he had “jumped through hoops like a trained circus poodle” to no avail. “I didn’t want to be back in that loop again,” he says.

Chase spokeswoman Christine Holevas says Reynolds does not qualify for a modification. “There are several alternatives other than a modification to avoid foreclosure and we hope to work with Mr. Reynolds and homeowners like him to find one that can work for their particular needs,” she wrote in an e-mail.

Reynolds hasn’t made a payment since he was denied in November 2009, but he also hasn’t been foreclosed on. If Chase does try to foreclose, he hopes he’ll be able to make a good case to a court-appointed mediator that he was wrongfully denied. He wants the accountability he says he hasn’t found elsewhere. “When I do go to foreclosure, I want to sit down and let it be dealt with at a court-level because, at this point, Chase is just ridiculous,” he says.

Suzanna Wertheim, After Media Attention the Terminal Cancer Patient Got To Keep Her Home 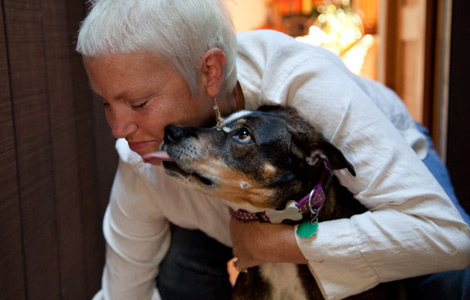 For Oakland homeowner Suzanna Wertheim two years ago, one day changed everything—the day she lost her job and learned she had terminal cancer. Struggling to pay her mortgage, she spent a year and a half running around what she called a “Kafkaesque” experience trying to get Wells Fargo to modify her loan. After we profiled Wertheim and she appeared on the Rachel Maddow Show, Wells Fargo offered her a modification that lowered her interest rate, extended the term of her loan and erased over $20,000 in fees, bringing down her monthly payment to something she could afford.

Wertheim calls the modification a “godsend,” shedding the mental strains of fighting to stay in her home. Soon after getting the modification, Wertheim learned her cancer had metastasized to her spine, cervix and brain. The former hospice nurse is now in hospice care herself, resting in her home during her final days. “The irony doesn’t escape me,” she says.

She says having a modification is allowing her to die in the comfort of her own home. In a recent e-mail, she wrote, “It means a lot (the world) to be able to remain in my home now.” Two of her kids are staying with her, and her mother has come to help care for her as well. Wertheim plans on leaving the house to her children.

Wallace Farmer, Moving On and Happier for It 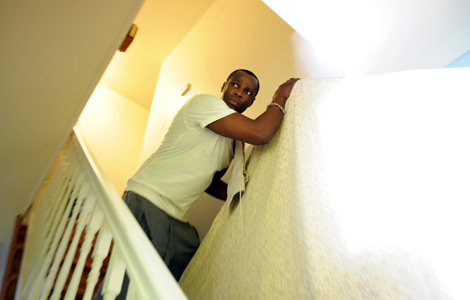 It’s been a little over three months since we documented how Wallace Farmer moved out of his Baltimore rowhouse. After more than a year of haggling and delays with Chase, Farmer became one of many homeowners who had given up on getting a loan modification. He found the stress to be unbearable, and when he took a look at the numbers, a loan modification wasn’t going to change the fact that he owed more than twice what his home was worth. So, he packed up and moved on.

Farmer’s been trying to start fresh. He filed for bankruptcy and moved into a one-bedroom apartment closer to his work in Washington, D.C. “I never thought I would ever feel happy during a bankruptcy, but starting over is OK,” he says. Farmer says he doesn’t miss the house at all, and he is considering downsizing again to a studio. Mostly, he just misses his cat, Go-Go, that he had to give up right before the move.

And this month, Farmer graduated from college with a degree in business administration. “When one door closes, you just gotta open another one,” he says. “You gotta keep it moving.”