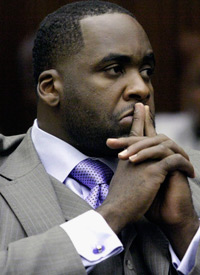 For seven months, Detroit Mayor Kwame Kilpatrick (D) has managed to hold on in office. In January, the Detroit Free Presspublished text messages ("Never busted. Busted is what you see!") between him and his former chief of staff. The messages appeared to show that the two had lied at a police whistleblower trial when they denied having had an affair and firing one of the plaintiff cops. Kilpatrick steadfastly refused to step down, even vowing to run for re-election.

He's since been indicted by the county prosecutor for perjury and obstruction of justice and by the state attorney general on assault charges (for allegedly pushing a cop who was trying to serve a subpoena). And city and state officials set into motion the creaky machinery for unseating a mayor.

Those who want Kilpatrick gone have four options. They have so far been motivated chiefly by what would be speediest.

Options No. 1 is simply to let prosecutors do the job. Kilpatrick would be forced from office if he were convicted in either of the criminal cases against him. But no trial dates have been set, and the pace of justice being what it is, it's likely to be at least a couple months before a verdict is reached in either case.

There's also the possibility of a recall election (option No. 2). But even if enough signatures could be gathered, that wouldn't happen until February.

The city council could initiate "forfeiture proceedings" -- essentially impeachment (option No. 3). The council tried to do just that. But in a setback yesterday, a judge ruled that the city charter was too vague on such authority.

The council had argued that Kilpatrick had committed an offense worthy of forfeiture when, in order to keep the text messages hidden, he'd used $8.4 million in city money to settle the police whistleblower suit last year. The judge found that the charter only allowed for ousting the mayor if he/she moved outside Detroit or was convicted of a felony. An appeal is possible, but would take awhile.

So that leaves option No. 4: According to the state constitution, the governor has the power to remove local officials from office, based on sworn accusations of misconduct. Prompted by a request from the city council, Gov. Jennifer Granholm (D) has tentatively planned to hold hearings starting Sept. 3. It's all up to her. And that leaves the Kilpatrick camp nervous:

Marcus Reese, a spokesman for the mayor's legal team, said attorneys are awaiting the structure and process Granholm puts in place.

"We think that it's problematic for the governor to sit as judge, jury and executioner," he said. "We're taking kind of a wait-and-see approach with the governor."