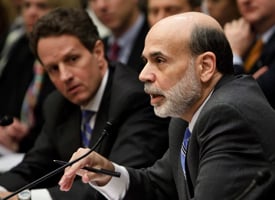 Before you handed over $85 billion to a failing company, what sort of information would you need to know about it?

The Federal Reserve and the Treasury Department had to make quick decisions to save AIG back in September. Officials believed they had to act urgently to avoid a global financial seize-up. They didn't have a lot of time to plumb AIG's byzantine books.

So what information did they have? And what information have they used in the following six months, which saw three additional bailouts, each one prompted by apparent realizations that the situation was even worse than was known before?

The public still does not know the answer, but that is slowly starting to change.

At yesterday's House Financial Services Committee hearing on the AIG bailout, Fed Chairman Ben Bernanke promised he would let Congress in on the secret.

The Fed has already briefed at least one congressman on the issue.

Rep. Elijah E. Cummings (D-MD) wrote to both the Fed and Treasury in late January, asking essentially the same questions about what information the government used to justify its AIG rescue, which has grown to a commitment of up to $180 billion.

The Federal Reserve Bank of New York responded to his inquiry and has since sent representatives to Washington, D.C., to meet with Cummings, who said the Fed was "forthcoming" and responded with "candor" to his request.

But the discussions were confidential; a Cummings staff member said the congressman can't discuss them.

"I look forward to the release of additional information to the public regarding the valuations that the Fed is conducting to assess AIG's business lines," Cummings said in an e-mail to ProPublica. "The more information we have, the more we can be assured that these valuations are being conducted appropriately and that AIG can one day repay the money it owes to the millions of taxpayers who continue to struggle every day to make ends meet."

The Treasury -- which has the most money on the line when it comes to AIG -- has not yet responded to Cummings' request. No one at the hearing asked Treasury Secretary Tim Geithner, who was head of the New York Fed when the initial decisions were made, to provide Treasury's set of numbers.

So while some rays of sunlight are starting to poke through the clouds, the public and Congress for the most part remain in the dark.