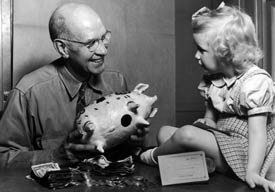 It’s been a while since we’ve updated you on the Treasury Department’s progress in actually doling out money to banks (and ailing auto companies and insurance companies). Our bailout tally remains up to the minute, however, and our list has been steadily growing. We’re now up to at least $302.23 billion that’s been earmarked for 355 corporations. $295.2 billion of that has already actually been lent or invested.

As you can see from our complete list of those companies, most of that money has gone to a select few of the nation’s financial institutions. And all but a few of those hundreds of participants are banks.

So just how much of the bailout has gone to small banks and how much has gone to the big boys? (Be sure not to miss ProPublicas investigation of how one small Nevada bank went under.)

Here are a couple breakdowns of the TARP spending so far to give you an idea:

As you can see from our interactive map, the institutions are scattered all across the country – by our count, at least one bank in every state except Arizona, New Mexico, Nebraska, Wyoming, Montana, and Alaska is participating. Two banks based in Puerto Rico got a total of $1.335 billion.

$180 billion, roughly 60 percent of the total, has so far gone to the five biggest financial institutions: Citigroup, Bank of America, AIG, Wells Fargo and JPMorgan Chase.

$280.2 billion, roughly 93 percent of the total, has so far gone to the top 28 institutions, all of which got investments or loans of $1 billion and above.

By contrast, the 300 smallest investments, doled out to local or regional banks, total $10.87 billion, roughly 3.6 percent of the total.

Or, if you prefer a more symbolic measure of whether Wall Street or Main Street is the big winner here, how about this: At least 24 of the banks are headquartered on a "Main Street" somewhere in America, and they’ve gotten a total of $3 billion (Comerica, which got $2.25 billion and is located on Main Street in Dallas, accounts for most of that). Only one of the big banks is actually headquartered on Wall Street – that’s Bank of New York Mellon, which got $3 billion. So call it even!