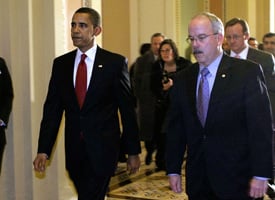 While President Obama worked the Hill yesterday, trying to get support on the now nearly $900 billion stimulus package, the Treasury secretary announced some measures to curb the power of lobbyists in determining how that other massive pile of money -- the Troubled Asset Relief Program -- is divvied up.

The Wall Street Journal has both stories. The story about the stimulus package describes a free-for-all that has, for example, "pitted the concrete and asphalt industries against one another," and has seen intense lobbying by the solar and geothermal power sectors, high-tech companies, textile importers and what the Journal calls the "shoe lobby."

There's no mention of rules or restrictions on lobbying for stimulus money, although the administration has issued strict limitations on the "revolving door," through which lobbyists move in and out of government employment and use those connections to pursue their clients' interests.

Then there was yesterday's announcement by Treasury Secretary Timothy Geithner on new lobbying restrictions for TARP money.

According to the Journal, "Treasury will have to certify to Congress that each investment decision 'is based only on investment criteria and the facts of the case.'"

The changes will apply to the latest installment of the TARP bailout money, a total of $350 billion, which Congress released two weeks ago, but appear to come too late to apply to the first portion of the money, which has already been disbursed.

This rule change comes after complaints from congressmen and from the Government Accountability Office that the TARP lacks proper oversight and accountability (PDF) mechanisms. As we wrote yesterday, clearing up the TARP's muddle might do far more to reduce lobbying pressures than seeking to bar lobbyist and lawmaker access.

While the new rules put some curbs on lobbyists, they are unlikely to shut special interests out of the decision-making process.

The restrictions, however, will apply only to Treasury, not to the primary regulators who oversee the banks and recommend which firms should receive government aid. As such, they may do little to prevent lobbyists and politicians from seeking to influence the process. It's also unclear if the restrictions will tamp down the growing practice of lawmakers lobbying regulators for funds on behalf of certain banks.

It's hard to see how Treasury can guarantee that their decisions are based only on "investment criteria and the facts of the case," when those "facts" and "criteria" have been filtered through other agencies that are still open to lobbyists, or, indeed, the influence of congressmen such as Reps. Barney Frank, Danny K. Davis and Luis Gutierrez, who have reportedly lobbied for banks in their district to receive chunks of the bailout funds (those stories are here and here.)

The Treasury has not released the actual rules yet, just general aims. The devil will be in the details.