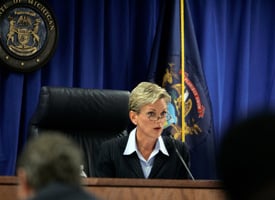 Breaking Update: The Free Press is reporting that Kilpatrick is expected to plead guilty tomorrow morning.

Michigan Gov. Jennifer Granholm opened a hearing this morning over whether to oust Detroit Mayor Kwame Kilpatrick. Kilpatrick faces charges of perjury, obstruction of justice, misconduct in office and assault, but only the charge of misconduct in office will be taken into consideration at the hearing. So how is it that a governor can fire a mayor?

Usually the responsibility would be divided. For instance, the attorney general would investigate and then seek a court order for the official's removal. Involving more than one branch of government ensures that there are some checks and balances in play. Instead, the governor is judge, jury and executioner in Michigan.

In this case, the one check on the Michigan governor's authority comes from the local government: The hearing must be in response to a request by a city council accusing the elected official of misconduct. The Detroit City Council submitted its request (PDF) to oust Kilpatrick on May 20, a week after it approved such a submission by just one vote.

(There's at least one other example of a governor removing a mayor of a major city. In 1932, Gov. Franklin D. Roosevelt opened a hearing for the removal of New York City Mayor Jimmy Walker. After the mayor lost his last judicial challenge to Roosevelt's authority, he resigned as mayor.)

In its letter (PDF) to Granholm, the council cited 33 reasons supporting the removal of Mayor Kilpatrick, but the hearing will focus solely on a 2007 whistle-blower settlement authorized by the council on the city's behalf. The settlement, which awarded $8.4 million to former Detroit police officers who were fired or demoted after they probed alleged misconduct by the mayor and his bodyguards, included a stipulation that all proceedings would remain under wraps. But the mayor did not inform the council of the secrecy agreement or the existence of incriminating text messages when he urged it to settle the case. The text messages (PDF) were obtained by the Detroit Free Press in January and showed that the mayor lied under oath about a sexual affair with his chief of staff and a plot to fire the head of the police department's internal affairs unit.

A conclusion that the mayor withheld crucial information from the council in order to prevent public knowledge of his perjury could constitute a furthering of his own personal interests, which is a violation of the City Charter's standards of conduct (PDF).

According to Granholm, the hearing will focus on just two questions:

Granholm alone will make the decision, and it will be binding. According to Free Press lawyer Herschel Fink, any attempts by Kilpatrick to appeal the decision will fall flat. "The constitution is very clear," he says. "This is not a judicial hearing. It is an administrative hearing within the governor's constitutional discretion. There can be no judicial review of it. As long as she exhibits fairness, that's enough."

But Peter Ellsworth, a former gubernatorial lawyer, told the Free Press that the matter was not so clear. According to him:

Kilpatrick could appeal to circuit court. But the circuit court could review only the governor's actions, not rehear the case. "The test is whether the governor has the authority to do whatever it is she might do, and secondly whether what she does is supported by substantial evidence," he said.

Granholm has said that she does not know how long the hearing will last, but she will make her decision immediately after the proceedings. If Granholm decides to oust Kilpatrick, City Council President Ken Cockrel Jr. will succeed him as mayor and Kilpatrick will be ineligible for election to any Michigan office for three years.