Legislators across the country are starting to rethink laws that tie driving privileges to the ability to pay fines, as evidence mounts that those laws disproportionately hurt poor and minority motorists.

That’s beginning to happen, too, in Illinois, where state lawmakers introduced a bill last month — after a similar bill last year was unsuccessful — to end license suspensions for unpaid parking tickets.

The legislation likely will face its biggest opposition from the City of Chicago, which generates hundreds of millions of dollars in revenue annually from tickets and uses the threat of license suspensions as leverage against indebted drivers. Ticket debt sends thousands of motorists into bankruptcy each year, ProPublica Illinois reported last month.

In a follow-up analysis, ProPublica Illinois found that low-income, black motorists from Chicago’s South and West sides bore the brunt of the more than 21,000 license suspensions issued across the state last year to drivers with at least 10 unpaid parking tickets or five unpaid tickets from automated red-light or speed cameras.

That analysis, of data* from the Illinois Secretary of State and the U.S. Census Bureau, showed:

The disparities come as no surprise to Eric Halvorson, a policy and communications associate with the nonprofit Chicago Jobs Council, which seeks to eliminate barriers to employment and move people out of poverty. The jobs council has been a leader in the campaign in Illinois to eliminate license suspensions tied to debt.

“Where are tickets, fines and fees already disproportionately impacting people? Where do people already have less ability to pay off those fines and fees?” Halvorson asked. “It’s in low-income communities and black and brown communities.”

Advocates say license suspensions make it harder for poor people to get to work or qualify for jobs and apprenticeship programs that require valid licenses. And because so many people with suspended licenses drive anyway — a misdemeanor in Illinois — they risk getting swept into the criminal justice system, where they face additional court fines and administrative fees.

“I can understand if a person was a habitual speeder and they lose their license because they were speeding all the time,” said State Rep. Carol Ammons, a Democrat from Urbana who introduced the bill. “But this is not related to driving.”

Officials for the City of Chicago, which last year opposed a similar proposal that stalled in committee, declined to address ProPublica Illinois’ analysis showing racial and income disparities.

In a statement, city officials said they give motorists multiple opportunities to pay fines before they accumulate, are sent to a collection agency or prompt the city to seek a license suspension.

For the city, license suspensions are an important tool to collect on tickets, fines and fees, which generated some $264 million in revenue in 2016.

Though Ammons’ bill covers a number of suspensions for non-moving violations, those for unpaid parking tickets are by far the largest category that would be eliminated if passed by the legislature and signed by the governor. Suspensions due to unpaid traffic camera tickets are not part of the legislation.

The bill, however, also includes a provision that is generating opposition from some who say they would otherwise support the measure. That provision would allow convicted sex offenders, who lose their driving privileges until they complete their sentence and register their new addresses with the state, to keep their licenses.

“The bill needs to be narrower,” said State Rep. Jaime Andrade Jr., a Chicago Democrat. “If the bill focused just on the tickets, I believe most people would say, ‘Yes, it’s common sense.’”

Illinois Secretary of State Jesse White’s office has taken a neutral position on the bill, although spokesman Dave Druker said that “as a general rule, we feel the penalties should be for road safety issues.”

Similarly, the American Association of Motor Vehicle Administrators, a national group that represents state motor vehicles departments, says states should focus their limited resources on dangerous drivers. License suspensions for what it calls ”social non-conformance” issues, including unpaid tickets, do nothing to improve traffic safety, the group argues.

ProPublica Illinois reported in February that thousands of drivers turn to Chapter 13 bankruptcy each year to cope with Chicago ticket debt, though they’re unlikely to obtain long-term debt relief. Bankruptcy gives these motorists — who are disproportionately black and low-income — a legal protection that allows them to lift suspensions tied to unpaid tickets, or prevent a suspension from happening in the first place.

It’s a trend described in a 2016 academic study as “filing to prevent the government from holding their licenses as hostages for repayment.”

Chicago first lobbied state officials for legislation to suspend licenses for ticket debt in the late 1980s to try to ease downtown congestion and boost revenue. At the time, a spokesman for then-Mayor Harold Washington said “congestion in the Loop caused when people double park or park blocking the flow of traffic will begin to end very soon as people realize that there is a serious mechanism in place to collect parking fines. As soon as we begin to process the bills for parking tickets, we should see our revenue stream greatly improved.”

Today, license suspension remains a potent tool to get drivers to pay what they owe. In 2016, close to 58 percent of Chicago drivers threatened with license suspension paid their debts or signed up for payment plans to forestall suspension or recover their licenses, city finance department data shows.

For those who can’t or don’t pay, the consequences can be overwhelming. Close to one in five Chicago motorists threatened with license suspension over unpaid tickets in 2016 filed for bankruptcy.

While most of the license suspensions affect Chicago drivers, some south and west suburbs with majority black populations also show high rates of suspensions, according to the data. These suburbs include Riverdale, Dolton, Bellwood, Hazel Crest and Maywood.

One argument against suspending licenses due to unpaid fines is that it sweeps more people into the criminal justice system, because so many people drive even when their licenses are suspended.

Statewide, police made more than 43,400 arrests in 2016 for driving with a suspended license, according to data compiled by the Illinois Criminal Justice Information Authority, a state agency that studies the criminal justice system and suggests reforms. Half the arrests were of black drivers. 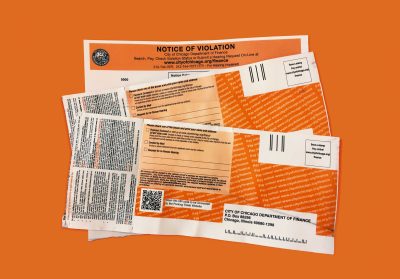 The Many Roads to Bankruptcy

Here are some stories of Chicagoans driven into ticket debt.

Still, we want to tell you a little bit about her, and about some of the other people we interviewed, because they helped inform our ticket debt investigation.

It’s unclear how many of those suspensions resulted from unpaid tickets.

Cook County State’s Attorney Kim Foxx last August ended the practice of prosecuting misdemeanor cases of driving with a suspended license when the underlying cause was the “failure to pay tickets, fees or fines.” Foxx said about 60 percent of cases in 2016 for driving on a suspended license were tied to debt.

The change was designed to cut costs, not because of any “philosophical problem with the way the law is set up,” First Assistant State’s Attorney Eric Sussman, one of Foxx’s top aides, told the Chicago Tribune last June. The new policy, the office said in a statement, allowed it to shift prosecutors to “matters more critical to public safety.”

Foxx’s arguments echo a hypothesis being studied by researchers at the Brennan Center for Justice at New York University School of Law that local governments spend more collecting fines and fees than they earn. The national project will examine the cost of using license suspensions, among a broader suite of enforcement mechanisms, for debt collection.

“You have a whole apparatus of public employees working to collect: clerks, administrative judges, lawyers, department of motor vehicle employees, police officers,” said Noah Atchison, a research and program associate with the Brennan Center. “If you arrest somebody solely for driving with a suspended license, and that was based on some unpaid fine or fee, you’re using a tremendous amount of public resources.”

*The suspension records come from a dynamic database and reflect 85 percent of all suspensions tied to unpaid tickets as of early February when the query was run. ↩︎

Sandhya Kambhampati contributed to this report.

If you have a story about how license suspensions or ticket debt have affected you in Chicago or anywhere in Illinois, please reach out: [email protected].