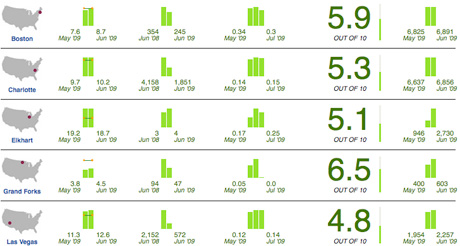 Stimulus dollars continue to flow across the country, and unemployment nationwide inched downward last month, but you might not know it by looking at the latest update for our eight StimCities.

For many cities, the economic recovery is still more hope than reality. In June, unemployment rose in seven of the eight cities we're tracking, including an increase of more than a full percentage point in Atlanta, Boston and Las Vegas. The number of building permits issued this year through June was well down from the same period last year — a drop of more than 55 percent in Charlotte and 85 percent in Seattle. Demand among our sample of food banks was up from May in seven cities out of eight.

The views of participants in our informal survey reflected those changes. When asked to rate the strength of their local economy, our panelists in five out of eight cities — Atlanta, Boston, Charlotte, Seattle and Las Vegas — gave the economy a lower rating, as a group, than the month before.

In Las Vegas, casino executive Ralph Marano said the slowdown in the vacation industry has led to additional layoffs. "Summer business is traditionally slow," he said, "but we're just not seeing very many people take vacations where they have to travel." Chris Theisgen, a crane operator, said there isn't a single person in his company working a full 40-hour week.

Kian Pornour, a real estate agent in Seattle, said that even though his business has picked up, the continuing uncertainty about the economy has left him hesitant to spend. Dwight Dively, the city's finance director, said he's seen anecdotal evidence of tourism improving, and some retailers seem to be doing better. "It's still bad," said Dively, "but at least it isn't getting worse."

If there's any ray of hope in our latest numbers, it comes from Elkhart, Ind., the center of stimulus attention this week thanks to a visit from President Obama. The city's unemployment rate edged downward from 19.2 percent in May to 18.7 percent in June. Elkhart was one of three cities in which our survey panel gave the economy a higher rating in July than in June — although, again, the change was small.

As ProPublica hasreported, Ed Neufeldt lost his job at an RV plant in Elkhart last fall, then found work in June stocking shelves for a food company. (He also introduced Obama at an earlier speech in Elkhart in February.) Neufeldt said the Electric Motors Corporation is investing in the county. Kari Huston, an EMC spokeswoman, said the company, which has not received stimulus funding, has bought one building and is considering buying one more, and it has hired dozens of administrative staff locally.

Correction: Last month's figures comparing jobs offered and jobs wanted on Craigslist were incorrect. The figures have been corrected in this month’s StimCities report.