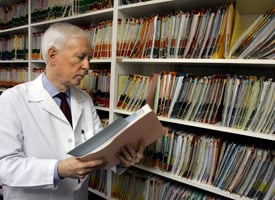 As we just noted a few minutes ago, you can now see who's been lobbying for stimulus money. First quarter lobbying disclosure reports were due by April 20, and thanks to the Senate's searchable database it's pretty easy to see who was lobbying, who paid them to do it, and how much they raked in. (Here are our tips on how to search for yourself.)

But parsing what lobbyists are actually nudging for isn't as straightforward.

Most lobbyists provided minimal information about their activities in the reports, limiting descriptions of their stimulus-related activities to such unedifying phrases as: "economic stimulus issues." (A GAO report last year found that some lobbyists were confused about how they should document their lobbying activities on disclosure forms.)

Still, it's hard not to notice some patterns from the big-spenders. In a search of lobbying filings that contained the phrase "recovery and reinvestment," five of the top 12 spenders we found listed "health information technology" as a specific interest within the stimulus. They are Pharmaceutical Research and Manufacturers of America, Pfizer, the American Medical Association, AARP and the American Hospital Association.

The stimulus provides $19 billion for health IT, with most of the money dedicated to incentives for doctors who adopt electronic records. Digitizing medical health records has not been without critics, who wonder whether the cost is worth the hype, and also wonder how privacy can be ensured.

Over 200 municipalities paid for stimulus lobbying in the first quarter, and most were smaller cities and counties. Small cities tended to lobby the Army Corps of Engineers for help with construction projects. The Aleutian Island city of Akutan, Alaska spent $30,000, or about $35 per each of its 860 residents. The fruit of Akutan's lobbying? Seven million dollars worth of construction from the Army Corps of Engineers on a small boat harbor. (Mayor Joe Bereskin was boarding a plane when we called him, but said he'd call back next week.)

So take a peek at the lobbying reports -- with our handy tips -- to see what shiny new construction project might be coming to a port or runway near you. Or check which bailed out companies -- General Motors spent nearly $3 million lobbying in the first quarter -- went back to Washington for more. Let us know what you find.