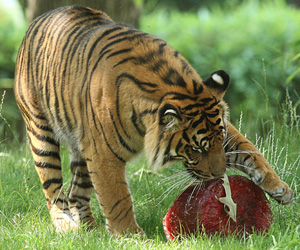 Soyono the Sumatran tiger will get her enclosure spruced up under the federal stimulus bill. So will Luke the Lion. But forget about Miss B., the old world rabbit at the Philadelphia Zoo. The polar bears in Providence? Left out in the cold.

The economic stimulus law explicitly bans state and local governments from spending stimulus money on zoos. But it makes no mention of the National Zoo in Washington, D.C., where Luke and Soyono live.

Sen. Tom Coburn, R-Okla., said it's a classic example of Washington saying, "Do as we say, not as we do."

"The question is whether or not the National Zoo is a priority right now given our economic times and the problems that we face," Coburn said. "Building a new place to house lions? Is that more important than building a new bridge?"

Despite multiple restrictions and cuts to appease budget hawks, federal and local officials have found ways to fund projects that were criticized during the congressional debate.

House Republicans have lampooned a proposed skateboard park in Pawtucket, R.I. But officials there say kids in the neighborhood have few recreational options, and they're going ahead with the project using a stimulus grant.

One of the key political compromises made to get votes for the $787 billion stimulus bill was a provision prohibiting state and local officials from spending money on casinos, golf courses, swimming pools, aquariums -- and zoos.

Local zoo directors say their facilities were unfairly tarred despite meeting stimulus goals: a backlog of "shovel-ready" projects that would create jobs, a mission of educating children and a role in raising environmental awareness.

Zoo officials around the country say they bear no hard feelings, but funding projects at the National Zoo demonstrates that their projects aren't pork.

"Zoos and aquariums don't belong on that (banned) list now, and they never did belong on that list," said Steve Feldman, spokesman for the Association of Zoos and Aquariums. "There's no difference between those projects and projects in St. Louis or Sacramento or Boise, Idaho."

The Smithsonian Institution, which runs the zoo, will spend about $11.4 million of its $25 million in stimulus funding at the National Zoo and the zoo's research center in Front Royal, Va.

The money will be used to install fire alarms at the zoo's visitor center, repair bridges, and renovate the veterinary hospital and the lion and tiger complex.

"We have some buildings that are 40, 50, 100 years old," said Smithsonian spokeswoman Linda St. Thomas. "Replacing roofs in the zoo, replacing deteriorating animal areas -- these are things that have to be done."

The National Zoo has a history of problems in recent years. After a string of animal deaths, auditors found crumbling buildings. Congress pumped millions into repairs. In 2006, a fire revealed that many buildings lacked alarms or sprinklers.

More than 2 million people a year visit the zoo, which has free admission and receives 70 percent of its budget from the federal government.

Despite the recession, admission at the 218 accredited zoos and aquariums nationwide has held steady as families look for affordable activities that are close to home, Feldman said. But zoos rely heavily on state and local budgets that are being cut.

A list of potential stimulus projects by the U.S. Conference of Mayors included a number of zoo renovations. The Philadelphia Zoo requested $20 million for construction at the children's zoo, the aviary and the Big Cat Falls exhibit. The Duluth, Minn., zoo said it could create 50 jobs with a geothermal energy project.

And in Louisville, the zoo listed $13 million for sewer system repairs first identified in 1999. Now, storm water might come into contact with zebra or gorilla waste before running off into a stream.

The lack of support for zoos "hurts," said John Walczak, director of the Louisville Zoo. "We've got a lot of great construction projects."

In New York, Gov. David Paterson had threatened to cut all funding for zoos from the state budget. The Wildlife Conservation Society, which oversees zoos, poked fun at the proposed cutbacks with a video, in which the zoo director informs a porcupine named Wednesday that she's been laid off.

The funding was restored, but the Bronx Zoo, which gets as many visitors as the National Zoo, shut down its sky ride in January and will close three exhibits, sending away several animals -- although Wednesday got a reprieve. A recent list of stimulus projects released by Paterson included $52 million for the zoo.

None of them will be funded.

Ivine Galarza, manager of Bronx Community Board 6, said the zoo provides affordable activities for one of the poorest places in the country.

"I feel like we always get the short end of the stick," she said.