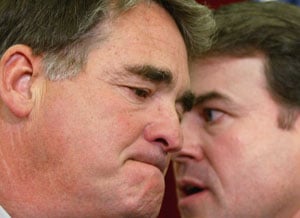 Last August, the Los Angeles Times reported that a deal had been reached between the White House and the lobbying group Pharmaceutical Research and Manufacturers of America (PhRMA). The pharmaceutical industry promised to deliver $80 billion in cost savings and to run television ads supporting the health care reform effort. In exchange, the White House would prevent Medicare renegotiation of drug prices and the re-importation of drugs from abroad.

Now, in a methodically researched report drawing on public records and press accounts, the Sunlight Foundation has gone back and forensically examined how the deal came to be.

To get a full picture of the interlocking interests at work, the full piece is worth a read. Here are a few of the key findings:

Recently, in the aftermath of Massachusetts Senator Scott Brown’s election, Tauzin announced that he would step down as CEO of PhRMA. As ProPublica has reported, when Tauzin was in Congress, he was at the forefront of crafting Medicare Part D, “the prescription drug program for seniors that has produced billions of dollars of profits for pharmaceutical companies.” A short time later, he had retired and was at the helm of PhRMA, earning as much as 10 times his salary as a lawmaker.

As the Sunlight Foundation observes, there was some irony in the White House having worked with Tauzin to secure a deal on health care:

Tauzin’s job change became fodder for a campaign ad that then presidential candidate Barack Obama ran in the spring of 2008 simply titled “Billy.”

The Sunlight Foundation also prepared a short video summary of the report: