How does an intern survive working for Rep. Don Young (R-AK)? No nose rings. Keep your hands out of your pockets. And when one of Young's lobbyist friends calls, make sure they get to talk to "whomever they want."

That's according to an "Intern's Survival Guide" that was distributed to incoming interns for Young's Washington, D.C. office. You can see the two-page guide here. Young's spokeswoman Meredith Kenny said that the document "was pieced together by several former interns and not by staff" and in "no way reflects the official policies of Rep. Young's office." The guide was obtained by Taxpayers for Common Sense.

Kenny provided a sheet of "Intern Guidelines" that she said was generated by staff and did reflect the office's official approach towards interns. You can see that here. There's no guidance on nose rings or what to do when Young's lobbyist buddies call. 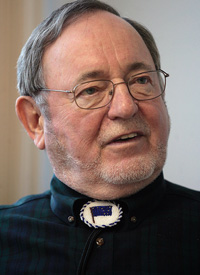 The unofficial survival guide (called "The 2111" in reference to 2111 Rayburn House Office Building, where Young's office is located) gives a complete rundown on the perils of working for Young. There's a section on how to deal with the unpredictable Young, for example: "Expects you to open doors for him (particularly tricky when he does not specify where he is going, make a guess)." And an even more extensive section on how to deal with the apparently also unpredictable lawmaker's wife, Lu: "Don't stand in her way -- don't stand anywhere I would suggest. Sit down or hide in the broom cupboard," and "Eat what she tells you to eat."

As for answering the phone, the guide warns of the "The A Team.... These people can talk to whomever they want, normally [chief of staff Mike Anderson] or [Sara Parsons]."

Among Smith's many clients is the Knik Arm Bridge and Toll Authority -- better known as the "Bridge to Nowhere."

Kenny said Young's staff had never referred to that group as "the A Team," and said those listed "include either former staffers (who represent Alaskans) or close friends and former colleagues of Rep. Young, whom he has known for many years." Five of the nine were former staffers for Young.

"It's always interesting to see how students view their intern experience," Kenny added. "It appears that some of what they have written is tongue in cheek, some to help relieve the daily stresses of working on Capitol Hill. At the end of the day, our goal is to ensure that all interns have the best experience possible."