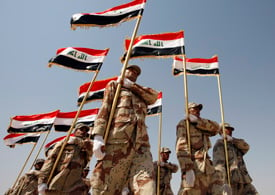 On any given day in Iraq, about 140,000 Iraqi soldiers are on duty. But some 1,000 are in jail, 2,000 are in the hospital or recuperating from injuries, and around 1,000 are absent without leave -- though all are counted as part of the Iraqi army that is supposed to one day replace U.S. soldiers on the battlefield.

Nobody, in fact, is exactly sure how many Iraqis are actually on duty -- partly due to problems with a government contract designed to count the soldiers, according to a recent audit.

As a result, five years into the war, the U.S. still doesn't know how many Iraqis stand ready to defend their country.

"There were problems and there still are problems," Stuart Bowen, the special inspector general for Iraq, said in an interview. "We are hopeful, but it's self-evident that it'll take a whole lot of time to work its way out."

Interviews with military officials and the audit that Bowen released earlier this week confront two crucial issues in the most privatized war in American history: How many Iraqi troops are on duty to replace U.S. soldiers on the battlefield, and how well does the government control the contracts it has issued?

Navy Capt. John Andrews, chief of staff for the advisory team to the U.S. training mission, said Wednesday that American commanders rely on the numbers to understand how many Iraqis are ready to respond to a sudden attack.

He said that figures submitted Wednesday show that about 64 percent of 140,000 Iraqi soldiers are present for duty. Another 24 percent are on approved leave. The rest are in jail, on medical leave, absent or simply unaccounted for, he said.

Part of the problem has been the U.S. effort to contract out the counting of soldiers. More than two years ago, the U.S. hired a private contractor to keep count of how many Iraqis showed up to work as policemen and soldiers. Military officials continued paying the contractor despite complaints that the system didn't work, according to the audit by the special inspector general for the reconstruction of Iraq. The total cost of the project may run as high as $21 million.

The Pentagon insists that contractors are vital to the war in Iraq. Today, there are more contractors in the country than U.S. military personnel, doing jobs that range from cleaning toilets to quizzing militants. But the audit suggests that the government is unable to demand accountability from those contractors because it has done a poor job of spelling out its demands -- even on vital projects such as an accurate count of the Iraqi security forces that are supposed to remove Americans from the line of fire. 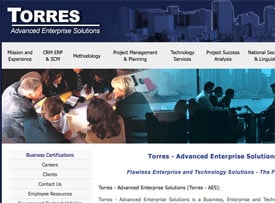 Bowen's account of the contract disagrees sharply with the contractor who won the job, Virginia-based Torres Advanced Enterprise Solutions.

Jerry Torres, the company's president, blamed the report on information from a disgruntled employee. He said the firm had received high praise from U.S. and Iraqi officials. He provided an article in which an Air Force lieutenant colonel was quoted saying the company demonstrated "absolute commitment" to the project even amid mortar and gunfire.

Torres said his company had six different contracting officials overseeing its work in 18 months. The experience is not unusual in Iraq. Government audits have repeatedly criticized high turnover in contract oversight.

Torres said the company signed an agreement with the military to extend work on the contract just three days ago.

"We did a darn good job and we'll continue to work," said Torres, an Army veteran who was wounded during combat in Afghanistan. "I could not imagine them extending the current contract if we're not delivering."

But that's exactly what the audit said the U.S. government did.

According to the audit, Torres installed networking equipment and computer terminals at 31 sites throughout Iraq but had only one terminal working by January 2008. All terminals now work, the military said. Torres was supposed to train 460 personnel in how to use the accounting system. Less than half that number were trained, the audit said. Torres has billed the government at least $13.7 million for its portion of the total project cost, according to the inspector general's office.

Contracting officials expressed unhappiness with Torres' "poor performance," the audit said, yet awarded the company a six-month extension in August 2007. The problems continued but the government never canceled the contract. Eventually, another contracting company was hired at a cost of $1 million to train Iraqi Defense Ministry officials to use the system.

The audit placed blame on the military for not establishing clear goals for the contract, making it impossible to terminate the agreement.

Auditors and contract experts have criticized the government's reluctance to end contracts in Iraq, whether because of problems with contractor performance or government ineptitude. There are no concrete figures on what percentage of contracts the government has cancelled in Iraq.

"If the U.S. government is to hold contractors responsible for poor performance, it must clearly specify in the contract what it expects in "deliverables" and contract performance," the audit said.

The number of U.S.-trained cops and soldiers has long been at the center of controversy in Iraq. U.S. strategy has relied upon Iraqi forces replacing U.S. soldiers on the battlefield.

When Gen. David Petraeus, the recently departed commander in Iraq, was head of the training program in 2005, Congress questioned the reliability of the ever-growing ranks of soldiers. In 2007, the GAO found that the number of Iraqi soldiers was "significantly lower" than reported by the Pentagon and State Department.

On paper, there are now approximately 590,000 Iraqi soldiers and policemen, the audit said. Those figures remain dubious however, because of padded work rolls, deaths and injuries. For instance, the Iraqi Army's 7th Division reported 11,478 personnel on the payroll in August 2008. Of those, however, only 7,556 -- or 66 percent -- were on duty. An estimated 20 to 25 percent were on leave. The rest were in training, dead, absent without leave or injured. 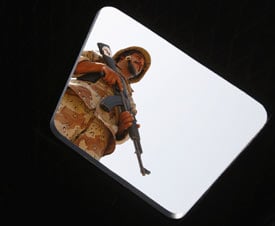 Andrews, who worked with the Iraqi Ministry of Defense in developing the accounting system, said that Torres was unable to produce reports that accurately counted the number of soldiers in a unit in a test of the system in February 2008.

Andrews said that Torres blamed the Iraqis for not entering complete data. The Iraqis said it did not have enough trained people to do data entry. Andrews declined to characterize Torres' performance, saying he only worked with the company for two months.

Andrews said that the military hopes to have the system functioning at a basic level by the end of this year. Still, he said that corruption by Iraqi military officials drawing pay for "ghost soldiers" and fear among Iraqis of being labeled as collaborators would hamper the accuracy of any system.

Andrews noted that even the U.S. military has difficulty keeping an accurate count of the number of soldiers on duty on any one day. The military maintains that a fixed count of soldiers is not as important as broader statistics measuring the battle readiness of Iraqi troops.

"We're not dead-ass accurate either," Andrews said. "It's a tough job to keep track of that number of people. This will help. It will improve the accuracy."

Col. Randy Buhidar, chief of staff for the Army's Iraqi training unit, said in a letter to the inspector general that the command "generally concurs" with the conclusions of the report.

A spokesman for the Joint Contracting Command, which oversaw the contract, did not respond to a request for interviews Wednesday. The press desk for military operations in Iraq issued a statement that the military had decided that the contract should not be terminated "due to extenuating circumstances."

Torres is a small company focused on linguistics and consulting services. On its Web site, the Arlington firm says that "Failure is not an option." In an article in Inc. magazine published last month, the company was lauded for achieving 16,455.8 percent growth in three years.

Torres, who founded the firm, said the project was one of the largest ever undertaken using Oracle's personnel-management software. He said that several employees were killed while fulfilling the terms of the contract, which required work in violent zones.

He said the company had fulfilled its training requirements and had delivered the network system in half the time required by the contract.

"The system is working perfectly,” he said.