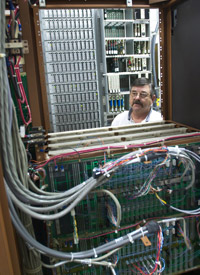 The $350 million of stimulus money earmarked to create a national broadband map may have been too aggressive, reports the Associated Press. The National Telecommunications and Information Administration signaled last week that it will reassess the program after spending an initial $100 million. The map of the country is meant to guide the expansion of high-speed Internet access, but it won't be complete until much of the broadband money has already been allocated. As we have reported, the program doesn't have the best track record.

With the Cash for Clunkers frenzy fading quickly into the past, September's car sales are expected to be the lowest of the year, reports The Business Insider. The crash comes after a spike in August, due to the highly popular program, and raises questions about how the economy as a whole will fare after stimulus funds run dry, writes Jay Yarow.

The clock is ticking for Nevada to get its stimulus reporting Web site up to snuff before the federally mandated deadline of Oct. 1, and state officials are getting nervous, reports the AP. States are required to report who is receiving stimulus money, how it is spent, how many jobs are created, and a whole slew of other information. So far, that information is missing from Nevada's site.

According to Bloomberg News, the federal building that housed President Obama's transition office is a signal of the slow pace of stimulus spending. The landmark skyscraper's stimulus-funded renovation hasn't gotten off the ground yet, seven months after the Recovery Act was passed. (We're keeping track of the pace of spending with our Stimulus Progress Bar.)