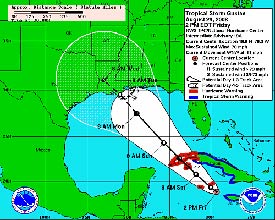 After hitting Haiti, where the death toll has hit 51, now-Hurricane Gustav is moving northwest, it is expected to pass over Cuba and then continue into the Gulf of Mexico. Landfall Tuesday morning could be anywhere along the Gulf Coast from southern Texas to the Florida panhandle, but the most likely scenario (see the 5-day forecast to the right) is for it to hit Louisiana at Category 3 strength, meaning there's a real chance that New Orleans, days after the third anniversary of Katrina, could be hit once again.

So is the city, the state, the country ready? The answer is...we don't know.

They are certainly in better shape than last time. In briefings, Gov. Bobby Jindal (R), Mayor Ray Nagin (D) and officials from the Army Corps of Engineers and FEMA all say preparations have been under way for days. FEMA Administrator David Paulison says his agency's failure to anticipate problems before, during and after Katrina was a "big-time lesson learned."

Given the catastrophic failures in just about every level of the government response in 2005, the areas of improvement were many. And officials say that key failures, like a breakdown in communications amongst responders, inadequate transportation for evacuees and a shortage of helicopters, have been addressed.

Some 1,500 National Guard troops will likely be dispatched to the city to maintain law and order. (Actually, the National Guard already has a presence due to the continuing disorder in the city in the wake of Katrina). There will be no use of the Superdome as the refuge of last resort this time, the mayor has said. And if the mayor issues an evacuation order tomorrow, as seems likely, hundreds of buses will carry some 35,000 people to shelters in the northern part of the state and Tennessee.

But key vulnerabilities remain. The Army Corps of Engineers is only about 20 percent finished with the $15 billion upgrade to the city's levees. The targeted completion date is 2011.

And while area hospitals stock up in preparation for the storm, some worry that University Hospital, the only major trauma center in the city, remains vulnerable to flooding. As the Times-Picayune reports, "a post-storm assessment of local hospitals and FEMA's Disaster Medical Assistance Teams would be necessary again before a hospital ship could be summoned." In 2005, a Navy ship didn't arrive until a month after Katrina.

"We are better prepared this time," says Mayor Nagin. On Tuesday, the city may be tested if that's good enough.