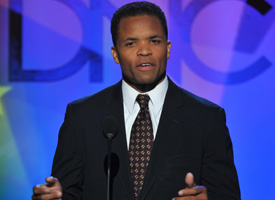 Rep. Jesse Jackson Jr.'s lawyer, James Montgomery Sr., said today he thinks the Chicago congressman is "Senate Candidate 5" cited in the criminal complaint against Illinois Gov. Rod Blagojevich. Montgomery said this assumption is based on a reading of the affidavit and a conversation with federal authorities.

The FBI allegedly recorded Blagojevich as saying that an "emissary" for Candidate 5 offered to raise a million dollars for the governor in exchange for Barack Obama's Senate seat. "We were approached 'pay to play,'" the governor allegedly said. Blagojevich has the sole power to appoint Obama's successor, and Jackson was heavily lobbying for the position.

Jackson (D-IL) held a news conference in Washington this afternoon and insisted he did not try to cut a pay-to-play deal with Blagojevich.

"I never sent a message or an emissary to the governor to make an offer, plead my case or propose a deal about a U.S. Senate seat, period," Jackson said.

In an interview with ABC News this morning, Jackson said he didn't know if he was Candidate 5, but that federal prosecutors contacted him yesterday to "come in and share with them my insights and thoughts about the selection process." He said he was told he is " not a target of this investigation."

At yesterday's press conference, Patrick Fitzgerald, the U.S. Attorney in Chicago, cautioned against assuming Candidate 5 was engaged in any wrongdoing.

We called Fitzgerald's office to ask about the ABC News report. They told us the leak about Jackson didn't come from them. "I can assure you that it's not coming from our office, and we have no comment or guidance on it," said office spokesman Randall Samborn.

The day after Obama's win last month, Jackson released a statement saying he would be "honored and humbled" to fill Obama's seat. On Monday, the day before the FBI arrested Blagojevich on charges that he conspired to offer the Senate seat in exchange for personal benefits, Jackson interviewed with Blagojevich for the position.

Jackson emerged from the meeting saying, "I am convinced that the governor has a very thoughtful process that he has put in place and is wrestling and weighing a number of issues in this enormous decision that he has to make."

Yesterday, Jackson said in a statement that he is "deeply concerned that this process may have been tainted." His office did not return our requests for comment.