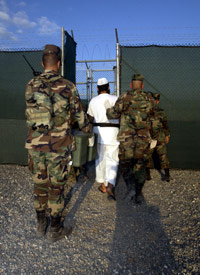 A federal judge has just ordered the release of 17 detainees currently held at Guantanamo Bay. The 17 are Uighurs, a Muslim group from China that has long been in conflict with the central government there. The Uighurs were already no longer designated as "enemy combatants." The men haven't been released because they could face torture if sent back to China, and few other countries were willing to take them. (That has so far included the United States.)

What happens now isn't clear. It's possible the Uighurs detainees could be released in the U.S. Of course it's also possible that the men aren't going anywhere soon. According to the Associated Press, "Bush administration lawyers argued Tuesday that [U.S. District Judge Ricardo M.] Urbina did not have the authority to order the Uighurs released into the United States."

Regardless of what happens, it's the first time a judge has ordered the release of any Gitmo detainees.