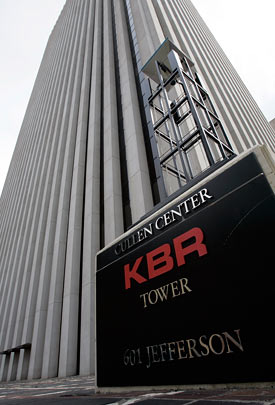 It’s been a rough couple of days for KBR, the former Halliburton subsidiary and largest contractor in Iraq.

Yesterday, McClatchy reported that one of its subcontractors has been holding a thousand foreign workers in windowless warehouses in Iraq for as long as three months. The men have no jobs, no money, and twelve toilets among them. (The men had been recruited for a contract that apparently fell through.) The Kuwaiti company also reportedly confiscated their passports, a violation of the U.S. military’s rules for contractors.

Also yesterday, sixteen members of the Indiana National Guard sued KBR, accusing the company of knowingly exposing them to hexavalent chromium (the cancer-causing chemical made famous by Erin Brockovich) at the Qarmat Ali water treatment facility in Iraq in the months following the 2003 invasion. According to the lawsuit, KBR knew that the chemical, which is thought to have been left behind as an act of sabotage by Saddam Hussein’s forces, was dangerous but failed to protect both its own employees and the Guardsmen assigned to protect them. One soldier has since died of lung cancer, not definitively caused by the chemical, while others weren’t even told of potential health risks until mid-September of this year.

At a Senate hearing in June, a former KBR employee accused the company of initially downplaying the chemical as a "minor irritant at worst" (PDF) and ignoring evidence from a U.N. report, not to mention the employee’s own basic Web search, that warned of the chemical’s risks. The Army is conducting its own investigation.

KBR has denied any responsibility for the problems, saying in a statement given to CNN, "KBR appropriately notified the Army Corps of Engineers upon discovery of the existence of the substance on the site and the Corps of Engineers concluded that KBR's efforts to remediate the situation were effective."

A second suit, filed on November 26 and reported today in Army Times, alleges further egregious behavior by the company. A Georgia man who worked as a civilian for the Air Force is accusing KBR of threatening the health of workers and soldiers at Balad Air Base in Iraq with unsafe food, water and fumes. Among his accusations: KBR served soldiers ice contaminated with "traces of body fluids and putrefied remains" after transporting the ice in trucks used to move corpses. The company is also accused of serving poultry, eggs, fish, beef and milk well past their expiration date, sometimes by as much as a year, and allegedly operating a dangerous "burn pit" for medical waste, which was often raided by stray dogs who then scurried away with human limbs in their jaws. (KBR declined to comment to the Army Times because it had not been formally served with the litigation yet.) The Army Times first reported on the health hazards posed by the Balad burn pits in October, and a subsequent Army report confirmed some of the paper’s findings.

Of course, this week’s allegations are just a few more drops in the bucket for KBR. The company has already been accused of bilking U.S. taxpayers, killing GIs with shoddy electrical work and engaging in human-trafficking. The company’s former CEO Jack Stanley pleaded guilty to bribery and corruption in September.