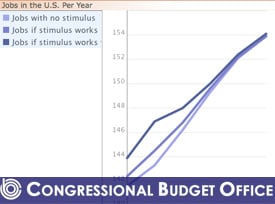 A CBO report released yesterday (PDF) contains new estimates of the economic impact of the final version of the stimulus package passed by Congress.

Unlike older estimates, which were based on hypothetical stimulus formulations, this one is the real deal. The difference: not much. The overall job creation estimate is still 1.2 to 3.6 million jobs by the end of 2010.

The Obama administration has estimated that 3 million to 4 million jobs will be created or saved by the stimulus package, a fudgy estimate we drew attention to as the bill was being debated.

The difference in job estimates is accounted for by different multipliers, which are essentially estimates of how much impact on the economy each dollar of federal spending or tax cuts has.

Assuming a high return to government spending and tax cuts gets you a high number of jobs. Assuming a low return, means more dire predictions for the success of the stimulus bill.

Here is a timeline of the CBO’s best- and worst-case scenarios: