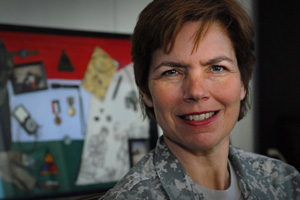 WASHINGTON, D.C.--The leader of the Pentagon's premier program for treatment and research into brain injury and post traumatic stress disorders has unexpectedly stepped down from her post, according to senior medical and congressional officials.

Brig. Gen. Loree Sutton told staff members at the Defense Centers of Excellence, or DCOE, on Monday that she was giving up her position as director. Sutton, who launched the center in November 2007, had been expected to retire next year, officials with knowledge of the situation said. The center has not publicly announced her leaving.

Sutton's departure follows criticism in Congress over the performance of the center and in recent reports by NPR and ProPublica that the military is failing to diagnose and treat soldiers suffering from so-called mild traumatic brain injuries, also called concussions.

It comes just as the Pentagon prepares to open a new, multimillion-dollar showcase treatment facility outside Washington, D.C., for troops with brain injuries and post traumatic stress disorder, often referred to as the signature wounds of the wars in Iraq and Afghanistan.

Late Wednesday, in a sign of disarray within the program, Sutton cancelled a scheduled appearance at the opening of the National Intrepid Center of Excellence, a gleaming new facility of waving glass and futuristic virtual reality treatment rooms in Bethesda.

"The war in Iraq and Afghanistan could end tomorrow; our mission to restore health, hope and humanity will endure for decades," Sutton wrote in her farewell message. "We simply must uphold our commitment to all who have borne the burdens of war on our behalf."

Sutton did not respond to requests for comment. Her replacement, U.S. Army Col. Bob Saum, also declined to comment.

Cathy Haight, the acting spokeswoman for DCOE, said Sutton's departure, though apparently well ahead of schedule, was part of a routine command rotation. Haight said Sutton decided to leave after turning down the Army's offer to take a new position overseeing the military medical system in Europe.

"If a general officer declines (a new position)...they are in a transition to retire," Haight said.

In recent months, legislators have questioned Sutton's ability to carry out the mission of the centers, which is to catalyze research and treatment across the military for soldiers returning with brain injuries and psychological wounds.

Congress directed the military in 2008 to create the brain injury center and other facilities for wounded soldiers. At an April hearing of a House Armed Services subcommittee, Rep. Susan Davis, D-Calif., said that the center had failed to carry out its role.

"The Defense Center of Excellence, while having achieved some notable small scale successes, has not inspired great confidence or enthusiasm thus far. The great hope that it would serve as an information clearinghouse has not yet materialized," Davis said.

"The center has also made some serious management missteps that call into question its ability to properly administer such a large and important function," Davis continued.

Scrutiny of Sutton rose another notch earlier this month, when NPR and ProPublica reported on the military's problems in handling soldiers with mild traumatic brain injuries. Such injuries leave no visible scars, but can cause lasting mental and physical difficulties.

Military statistics show that about 115,000 troops have suffered such injuries since 2002, but in interviews, Army experts acknowledged the true toll may be far higher. Unpublished research we reviewed suggests that tens of thousands of soldiers may have gone undiagnosed. Our reporting also showed that even when soldiers were diagnosed, at one of America's largest Army bases, they have had to fight to receive appropriate treatment.

Still, some veterans' advocates were shocked and saddened that Sutton was leaving. They said she had been a forceful, visible advocate for wounded troops and their families who had never received the full support of the military's medical establishment.

Critics of the military's health system have noted a power vaccum at the top of the military medical structure. Four people in just over three years have rotated through the Pentagon's top health policy position, the assistant secretary of defense for health affairs.

"She was always there for the troops," said one veterans' advocate, who did not want to be named for fear of criticizing the military. "She's become the scapegoat."

In an April interview with NPR and ProPublica, Sutton shrugged off the criticism. "Leading change," she said, "is a journey not for the faint of heart."

"We are very proud of the team that we have built, the concept in terms of the center of centers, the network of networks," she said. "Are we anywhere close to where we want and need to be? No. Of course not."