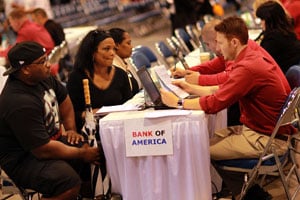 New data released Monday shows that the administration's mortgage modification program continues to be plagued by delays and disappointment for hundreds of thousands of homeowners.

Of the 1.2 million homeowners who have begun a modification in the last year, about 265,000 have been stuck in "trial" periods for six months, double the three months that trial periods are supposed to last.

You can see our interactive breakdown of the data here. It shows which mortgage servicers are primarily responsible for the continued logjam.

The delays have long been a problem with the program: we reported in January that nearly 100,000 homeowners had been stuck in a trial period for over six months. Homeowners and advocates frequently complain that mortgage servicers ask for the same documents over and over, give contradictory information, and make mistakes. Nearly 1,000 homeowners have written to ProPublica over the last year to tell us their stories about seeking a mortgage modification, and we continue to hear the same complaints.

The prolonged trials hurt homeowners by damaging their credit, increasing the balance of their mortgage, and preventing them from saving for the possibility of foreclosure. Homeowners who are rejected after prolonged trials sometimes find themselves worse off than if they'd never been in a trial.

As we reported back in February, JPMorgan Chase, one of the largest mortgage servicers, has a particularly large backlog. The Treasury Department reports (PDF) that approximately 72 percent of its active trials, approximately 86,000 homeowners, have been in trials for longer than six months. Chase spokeswoman Christine Holevas pointed to a "number of steps" that Chase had taken to improve its performance, such as hiring additional staff and holding "homeowner's assistance" events, but did not offer an explanation for why it has lagged so far behind the other servicers.

Saxon Mortgage, a much smaller servicer that is a subsidiary of Morgan Stanley, had a similarly large backlog. A spokesperson did not respond to our question on Monday, but told us three months ago that the company had "launched a number of proactive programs" to clear the backlog.

During a conference call Monday, administration officials said they have posted the data about the backlogs in order to put pressure on the lagging servicers. At the same time, Phyllis Caldwell, a Treasury official heading the mortgage modification program, offered a host of reasons for why servicers might be lagging, ranging from double-checking on denials to making sure in-house alternatives are available for those who are dropped from the government program.

Treasury has long warned servicers that they need to clear the backlogs, but it has also failed to crack down. The government issued rules in late December, warning that lenience would end at the end of February. When we reported on the backlog in February, a Treasury spokesperson warned that lagging servicers could face penalties. Three months later, no penalties have been levied. Caldwell and TARP chief Herb Allison said that they'd recently sat down with servicers, who had committed to clearing their backlog by the end of June.

Of course, there are two ways the backlog could be cleared: either through permanent modifications or from homeowners being dropped from the program.

Treasury officials have estimated that between one-third and one-half of all trials will fail. Currently, that rate is running closer to one-half. So far, nearly as many homeowners have been dropped from the program (278,000) as have begun a permanent mod (299,000). Allison and Caldwell said they expected the cancellations to continue to rise as the servicers cleared their backlogs.

Trials can be canceled because the homeowners don't make the trial payments or are otherwise disqualified by the servicers. As we have reported, those disqualifications have sometimesbeenillegitimate. The officials said disputations by homeowners or housing counselors are another reason for the continued backlog.

Our interactive chart shows the cancellation rate at each of the larger servicers in the program. Some are already near 50 percent. Some have denials that are artificially low. Bank of America, for instance, by far the largest servicer, has canceled only about 32,000 modifications, about 11 percent of the number of trials started so far. But the bank said last week that it was in the process of mailing "thousands" of homeowners denial letters.

For the homeowners who have successfully navigated the program and received permanent mortgage modifications, there was some good news and bad news in Monday's numbers. The average homeowner in the program saves about $516 per month on the lower mortgage payment, Treasury reported. But that homeowner is also struggling with a sizable amount of other debt: even with the lower mortgage payment, about 64 percent of the average homeowner's pre-tax income is eaten up by monthly debt payments (credit cards, car payments, second mortgage, etc.), a statistic that has made some observers very skeptical about the prospect for these modifications to last. Already, more than 3,700 homeowners who were granted permanent mods have fallen out of the program.