"It just didn't sound right to us, the whole situation." That's what it came down to for the McCain campaign, a spokesman tells the New York Times. Last night, two days after the Washington Post first drew attention to a collection of contributions collected by Harry Sargeant III, the campaign announced it was returning more than $50,000 in contributions. 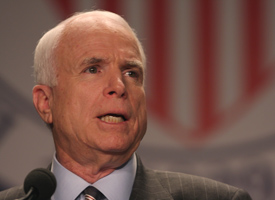 It's not the first time this election year that the practice of bundling has drawn scrutiny for being a possible conduit for fishy contributions. Most famously, questions about Hillary Clinton fundraiser Norman Hsu ultimately led to the return of hundreds of thousands of dollars in contributions and federal fraud and campaign finance charges.

The idea of bundling itself is simple enough. Campaign finance laws limit individual donations to $2,300. But an individual can still deliver big money for a candidate by collecting contributions from friends, business associates and so on. The bundler then delivers the contributions to the campaign. Bundling is a big part of campaign fundraising. As the Wall Street Journalreports this morning, Barack Obamaâs campaign says it has 35 bundlers who have delivered more than $500,000 in contributions (for a total of at least $17.5 million), while McCain has 63 (for a total of almost $31.5 million). McCain's campaign, in fact, lists all of its $50,000+ bundlers on its Web site. We couldn't find a similar list on Obama's site.

The McCain camp says that one thing that caused concern about the contributions from Sargeant was "the idea there were people giving to the campaign who had no intention of voting for or supporting John McCain." But that's not such a shocking idea in itself. Businesses and interest groups hedge their bets all the time by contributing to rival candidates. Some of these contributors, however, were particularly impolitic about their ambivalence. One didn't even seem ambivalent, telling the Times that McCain is "like a worse copy than Bush."

A recent employment-bias complaint showed how bundling can work at a company. In the complaint, a former executive of a consulting company alleges that he was fired because he didn't heed the CEO's requests to contribute to Mitt Romney's presidential campaign. In one e-mail, the CEO wrote to the executive: "This is not about me trying to force a political candidate on you and trying to see how you vote. This is just business and the way business works."

In such a case, it's easy to understand the motivations for such contributions. But Sargeant's case remains murkier.

As the Times reported yesterday, the contributions actually came via Sargeantâs Jordanian business partner, Mustafa Abu Naba'a. But the contributors are not Abu Naba'a's employees or seemingly even related to him. They came from members and friends of a single extended family, the Abdullahs, in California. One member of that family, a Palestinian immigrant named Faisal Abdullah, claimed to have been the driving force behind the haul, explaining only, as the Times put it, âthat he harbored vague designs on a political career and that a discussion with Mr. Abu Naba'a gave him the idea that fundraising was a way to get started."