We're introducing a new feature, Morning Read. It's a pretty basic concept: We highlight one article every morning we think is worthy of extra attention. Enjoy. 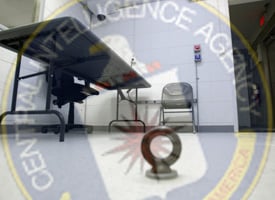 Plans for a war crimes tribunal at Guantanamo Bay have long faced intense criticism, including from the tribunal's one-time chief prosecutor. The first trial started last week: Salim Ahmed Hamdan, a former driver for Osama bin Laden, has been charged with conspiracy and material support for terrorism.

So far there have been relatively few fireworks. A judge excluded any statements Hamdan made during interrogations at Bagram, where abuse of prisoners was reportedly routine. Hamdan also apparently became upset and walked out after video was shown of him being, as the Los Angeles Times put it, âtrussed, hooded and badgered by armed and masked U.S. captors.â

Meanwhile, yesterdayâs Los Angeles Times had a "reporterâs notebookâ dispatch giving a peek behind the scenes. According to the Times' Carol Williams, no mention of the CIA will be allowed at the trial:

No records of the agency's interrogations of Salim Ahmed Hamdan can be subpoenaed, and no agent can be called to testify about what he or she learned from Osama bin Laden's former driver.

When defense attorney Harry H. Schneider Jr. attempted to demonstrate how many interrogations Hamdan had undergone in the months after his November 2001 arrest -- at least 40 -- he couldn't list the CIA along with more than a dozen other agencies including the Secret Service and what was then known as the Immigration and Naturalization Service.

The prohibition against naming the CIA came in a "protective order" issued by the court at the government's request. The tribunal's deputy chief prosecutor, Army Col. Bruce A. Pagel, couldn't say which agency sought the shield or what arguments were made to justify it.

We just traded e-mails with journalist Jonathan Mahler, a New York Times Magazine writer and author of the forthcoming book on Hamdanâs case, The Challenge. Mahler said heâs not aware of any direct proof that the CIA interrogated Hamdan -- with "enhanced interrogation techniques" or otherwise -- but there was "a big date gap in the catalog of his interrogations."

It wouldn't be very surprising if the CIA did in fact give its own very secret treatment to Hamdan. As the Washington Post first reported, the CIA long maintained a "prison within a prison" at Guantanamo Bay.

The secret facility, "one military official" told the Post, was "off-limits to nearly everyone on the base." The CIA also declined to discuss it with the Post.