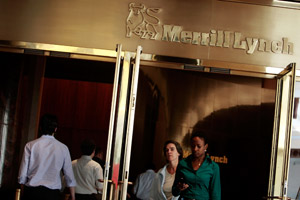 As we've been reporting, other banks did deals similar to the one at the center of the SEC's lawsuit against Goldman Sachs.

We're not the only ones who've noticed that. In the past several days, a legal back and forth has emerged between Merrill Lynch and the Dutch bank known as Rabobank, which is accusing Merrill of essentially doing the same kind of deal Goldman is being sued for (i.e., failing to disclose to investors that a hedge fund was involved in the creation of a risky CDO that the hedge fund intended to bet against).

Rabobank sued Merrill Lynch in state court in Manhattan last year over a deal called Norma, a $1.5 billion CDO that went bust within a year of its creation in 2007. Norma -- which we wrote about in our original story -- was one of among 30 CDOs Magnetar helped create in cooperation with at least nine banks between 2006 and 2007. As with Norma, the deals were packed with risky assets, which Magnetar was then able to bet against. (Magnetar denies these assertions and says it never took a position on the market.)

Hours after the SEC's suit was announced last Friday, the lawyer representing Rabobank sent a letter to Judge Bernard Fried, noting similarities to what Goldman allegedly did:

"The SEC charges bear directly on the sufficiency of Rabobank's complaint as Rabobank has alleged that Merrill Lynch engaged in precisely the same type of fraudulent conduct in the structuring and marketing of Norma through having failed to disclose that Norma's collateral pool had been selected to benefit short positions taken by Magnetar Capital LLC ('Magnetar'), the equity investor in Norma."

That drew a quick response from Merrill's attorneys. In a letter submitted to the court, they said Rabobank's attempt to portray the lawsuit as similar to the SEC's complaint against Goldman is irrelevant because it involves an "entirely different transaction."

Merrill also says it would have no incentive to build a CDO that it believed was likely to fail because "Merrill Lynch, as holder of $975 million in A-1 Notes (or 65% of the total $1.5 billion issuance), was the investor in Norma that had the most incentive for the transaction to succeed and the most to lose if Norma failed."

This, of course, drew a response to the response. On Tuesday, Rabobank's attorney sent another letter to the judge. After clearing up a spat about whether Rabobank had been sending information to the press, he wrote:

"Even if Merrill Lynch is correct that it suffered a loss on Norma (which is not supported by the pleadings), losing money is not a defense to fraud. Indeed, the SEC charged Goldman with fraud notwithstanding that it reportedly lost nearly $100 million on the ABACUS transaction."