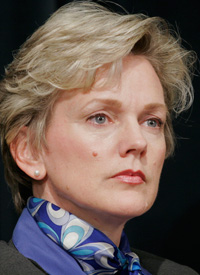 It's not something you see very frequently. Next Wednesday, Michigan Gov. Jennifer Granholm (D) will hold a hearing on whether Detroit Mayor Kwame Kilpatrick (D) should be booted from office.

In a post last week, we ran down the many options available to those wishing to expel the beleaguered mayor, who faces two separate criminal prosecutions. By far the fastest means would be for Granholm, the state's former attorney general, to determine that Kilpatrick had committed official misconduct. The state constitution gives her the power to remove him from office.

Granholm proclaimed in an order this morning that the hearing will focus on questions about an $8.4 million settlement the city paid to two police whistleblowers who had accused Kilpatrick of misconduct. The deal, approved by the mayor, sealed text messages between the mayor and his chief of staff that appeared to show the two had lied at trial about their affair.

The hearing will be broadcast live.