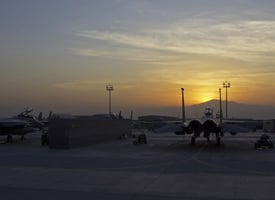 Rendition has long been one of the most controversial aspects of the U.S.'s counterterrorism fight. At least four dozen terror suspects have been sent by the CIA to other countries, where many have said they were tortured.

Today's New York Times says the U.S. military has a similar program: It has "secretly handed over more than 200 militants to the intelligence services of Saudi Arabia, Egypt and other countries, nearly all in the past two years."

The militants were captured in Iraq and Afghanistan and then transferred to their home countries. According to anonymous officials cited by the Times, the program was started as an alternative to sending militants to Guantanamo Bay. (The U.S. has only transferred a handful of detainees to Gitmo in the last two years.)

The military's shipment of the foreign fighters has also apparently been hush-hush. The Times says until the paper "began to conduct interviews for this article in July, military officials had not acknowledged that any had been repatriated."

There do appear to be significant differences between the military’s program and the CIA's renditions. Citing "military officials," the Times says "prisoners can block their transfers to home countries." No word on what happens to the prisoners if they choose to exercise their apparent right to veto.

Still, there seem to be significant questions. The Times says many of the foreign fighters "are initially held, without notification to the Red Cross, sometimes for weeks at a time, in secret at a camp in Iraq and another in Afghanistan." International law also bars countries sending detainees to countries where they are likely to be tortured. U.S. officials told the Times that the military makes the countries promise the detainees won't be mistreated -- and won't be released. (Human rights advocates have viewed such assurances skeptically.)

So how are the detainees actually faring after they're transferred? Hard to tell. Prisons run by Middle Eastern intel services aren't exactly a paragon of transparency. Saudi Arabia, for example, doesn't allow inspections by the Red Cross.

"When it comes to sending people back home, there is really no way for us to find out how they are doing," one human rights researcher told the Times.

The Times says "American officials have praised" Saudi Arabia's efforts in turning fighters against jihad. One "Saudi official" crowed, "What you have is a situation in which the U.S. wants to get all the Saudi prisoners to Saudi Arabia because the Saudis know how to deal with them."