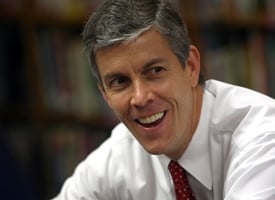 * Education Week covers the tension emerging between states and their school districts over how stimulus money can and should be spent. Education  Secretary Arne Duncan is using the American Recovery and Reinvestment Act to institute widespread reforms, one being improvements to special education. A New Jersey  school district manager interviewed by Education Week expressed frustration that his district's proposal was rejected because it didn't allot enough funding to special-education students. What vexes the manager are what he calls "vague, open-ended kind of definitions of what they would accept." "States, Districts in Delicate Dance on Stimulus" is how Education Week puts it. Time will tell how this all plays out.

* Speaking of tensions, the Wall Street Journal reports that "some of the states worst hit by the recession are getting far less federal economic-stimulus money per person than states faring better." Check out its map, which breaks down stimulus money per capita for several programs.

* About three-quarters of Iowa's stimulus-funded transportation projects have been put out to bid, reports the Sioux City Journal. The federal government required states to obligate 50 percent of their stimulus transportation funds by June 30, 2009. As the article points out, this means that Iowa is way ahead of the game. Not only did it meet the deadline, but it's well on its way to meeting the next deadline of obligating remaining funds by March 1, 2010.

* Meanwhile local officials in Connecticut feel that they're "taking the fall" because the state government prematurely guaranteed that "shovel-ready" projects would be completed this year. Local officials' biggest gripe is over the disbursement process. The state government reimburses municipalities 60 days after they file for the money. That only works, the officials point out, if the municipality has money on hand. The Connecticut Post has more.

* South Carolina's Aiken County School Board approved a budget just $2 million short in revenue sources -- closing a $12 million gap before stimulus funds were made available. It's too early to know what impact the stimulus will have, but several patterns are emerging: it is helping school districts stave off furloughs, and state officials say more jobs are being saved than created. Today's USA Today provides the big picture: "Cuts, tax hikes, stimulus help most states avert 'doomsday' crises."

* A backlog of tens of thousands of warrants issued in Maryland will be processed with the help of stimulus money, reports the Baltimore Sun.

*The Washington Post reported last week that Michelle Obama will play a more substantive policy role. On Monday, the first lady announced that more than $37 million in stimulus money will be given to health clinics in Illinois, writing that "community health centers provide care to the Americans who need it most and their work has never been more important." ChiTown Daily has the rest.