This is the latest from our new stimulus blog. 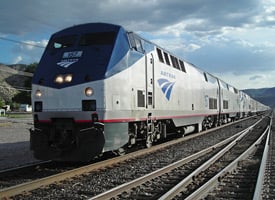 Lots of stuff this morning: Vice President and longtime rail commuter Joe Biden will be at Washington's Union Station at noon to announce stimulus funding for Amtrak. And he and the president will issue regulations on spending no-nos. "A little hint," Biden told a meeting of state officials yesterday. "No swimming pools in this money; a few other things."

The meeting brought state budget officers and auditors to the White House to talk about accountability for the stimulus. The theme: Don't waste it.

Meanwhile, House Speaker Nancy Pelosi continued to bat down flames over the idea of a second stimulus while some Republican governors continued to reject the first one. Texas Gov. Rick Perry officially said no thanks to $555 million to expand unemployment benefits. And the South Carolina legislature moved to overrule its governor, who vowed to turn down nearly a quarter of his state's stimulus share.

Project of the day: In case you missed our earlier post, 22 concrete toilets at the Mark Twain National Forest.