The National Security Agency has handed hundreds of its internal forms to the Memory Hole, a Web site that has previously grabbed national headlines by using Freedom of Information laws to make the government hand over photos of military coffins coming back from Iraq. 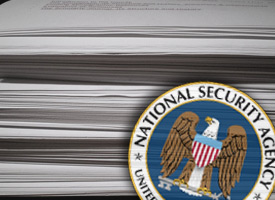 This time, the Memory Hole requested blank copies of NSA's forms -- and the NSA obliged. Now the Web site has everything from psychological testing forms to a secrecy "oath" for people who have unintentionally come across information that the NSA considers sensitive.

Some of the documents give a least a bit of insight into how the NSA deals with both staff and outsiders.

The secrecy oath screams in caps that the person must never disclose the sensitive information.

The psychological test appears to be an application form. It asks whether the responder has been unfaithful to her/his spouse and whether the applicant's children have ever been prescribed Ritalin or Aderall, or been diagnosed as "mentally retarded."

The NSA, one of the U.S.'s main intelligence organizations, was at the heart of the recent warrantless wiretapping scandal.

The Memory Hole's site has been down for much of the morning, presumably because they're overloaded by readers trying to download the memos, which were posted as two big PDFs. We'll take a closer look once we can get back in. In the meantime, give it a try yourself. We’re also calling the NSA for their comment.