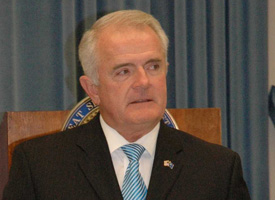 A stimulus showdown is brewing in Nevada. If the Legislature gets its way, someone in the state controller's office will oversee stimulus spending, but Gov. Jim Gibbons is refusing to cede authority over the state's $2.2 billion in federal funds, the Las Vegas Sun reports. The turf war erupted after Gibbons tried to create a position of "stimulus czar" that he could fill with anyone he wanted, regardless of qualifications. According to the Sun, "Legislators balked, given Gibbons' past penchant for controversial appointments."

The U.S. is recovering from the recession as the stimulus takes effect, according to a Bloomberg News survey of economists. "We've averted the worst, and there are clear signs the stimulus is working," said one. But the Washington Post suggests that you take reports of recovery with a grain of salt. A story today says that "over at least the next year, the benefits are unlikely to materialize in the form of higher wages or tax receipts or more jobs."

Stimulus money couldn't come at a better time for police departments in small Utah towns, reports the Salt Lake Tribune. Budget cuts have left many departments in dire straits: One police chief told the Tribune that some of his officers have resorted to paying for uniforms and training out of their own pockets. Now 37 departments in small communities will each have an extra $10,000 to spend, thanks to stimulus grants.