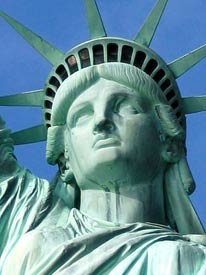 How much is a new citizen worth? Well, to the courts performing the naturalization ceremonies, $14.09.

That's how much the government pays courts to administer each oath. According to the Washington Post and a new report (PDF) by a government ombudsman, that money is enough to keep some judges from letting officials with U.S. Citizenship and Immigration Services perform the ceremonies themselves. This has resulted in a glut of delayed naturalization ceremonies.

A little less than half of USCIS district offices administer naturalization oaths themselves. In the other districts–including New York, Los Angeles, Chicago and Detroit–federal district courts have the sole power to do so. Those courts are then reimbursed by USCIS for all oath ceremonies they perform. For instance, Los Angeles received $2.4 million for the 169,799 oaths it administered in 2008.

But a surge in citizenship applications has threatened to overwhelm the courts performing oath ceremonies. The previous USCIS ombudsman told the Post that some people are waiting months for a judge to schedule their naturalization ceremonies after getting USCIS approval. The court is supposed to administer the oath within 45 days. Nevertheless, some courts refuse to alleviate delays by giving USCIS officials the right to administer the oaths themselves. Citing the previous ombudsman, the Washington Post says that is at least partly because they want to generate those fees.

In one case, the court refused to schedule enough ceremonies for a particularly large number of applicants and then "vehemently refused" to let USCIS officials administer the oaths themselves. As a result, nearly 2,000 people weren’t able to register to vote in the 2008 election, despite USCIS’ efforts to get them naturalized in time.

Another court refused to perform a ceremony unless USCIS ponied up for a ceremony at a "scenic historic site at which the media would attend," which USCIS eventually did.

Federal judges have defended their exclusive right to perform the ceremonies by claiming they preserve the "sensitivity and solemnity" of the event. But sensitivity and solemnity are exactly what were not displayed in several cases described in the report. In one, a judge said in his opening remarks that people should "get off their dead [posteriors] and oppose the war." Another judge performed an entire ceremony in Spanish, a language which several applicants indicated they didn’t understand.

The ombudsman says that despite these problems, federal courts have generally been "very responsive" to USCIS requests for oath ceremonies.