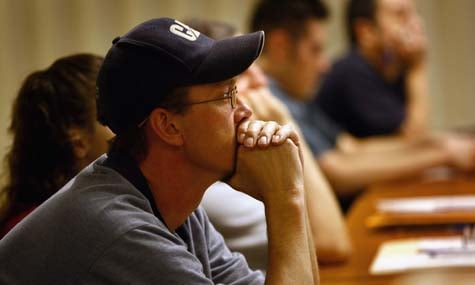 New data released Friday shows that the story for the government’s foreclosure prevention program remains the same: Mortgage servicers have delivered relatively few permanent modifications, and hundreds of thousands of borrowers in trial modifications have yet to receive a final answer after many months of waiting.

To illustrate the performance of the servicers in the program, we’ve created an interactive breakdown of the data. There, you can see how bad the logjam is at each one.

According to a ProPublica analysis of the new data, approximately 150,000 homeowners have been in a trial for longer than six months. The trials are supposed to last only three months – time for the homeowners to turn in all their financial documentation and demonstrate an ability to make the lower monthly payments.

The extreme delays for some borrowers have two main causes, said Laurie Maggiano, the Treasury Department official in charge of shaping the program, speaking at a Mortgage Bankers Association conference last month. In cases where the servicer reported that the borrower had not turned in the requisite documents, the Treasury directed the servicer to extend the trial to obtain them. But she said in other cases, "the servicer just took their jolly old time."

A Treasury spokeswoman told ProPublica last month that servicers could face penalties for not resolving their backlogs. Asked whether penalties were forthcoming now, she attributed the continued backlog to a new Treasury requirement: Servicers must recheck homeowner denials based on the Net Present Value (NPV) calculation – the secret formula servicers use to determine whether mortgages qualify for the program.

"This process may require that some servicers take additional time to process trial modifications," she said, "but it ensures that eligible homeowners are not excluded."

So at least part of the backlog might be due to borrowers who have already been denied but have not been officially dropped from the program because the servicer is double-checking the basis for the denial.

The NPV test is central to the program: It determines whether offering the homeowner a modification is likely to be more profitable to the investor (e.g., a bank or investors in a mortgage-backed security). If it is, then the servicer is contractually obligated to offer a modification. If it’s likely to be a money-losing move, then no modification is required. An NPV calculation is supposed to be run whenever a homeowner applies for the program.

As we’ve reported before, the formula has many inputs, most of which are protected from scrutiny. A mistake by a mortgage servicer can result in the denial of a modification. Speaking at the same MBA conference last month, Dane D’Alessandro, the Freddie Mac official in charge of ensuring that servicers use the NPV formula correctly, said such mistakes occur frequently.

So far, 90,136 homeowners have been dropped from the program – Treasury did not provide data for how many were because of a negative NPV result. In a statement Friday, Wells Fargo, one of the biggest servicers in the program, said that about half of the 108,000 homeowners who had made three trial payments through February would ultimately be denied, and that the NPV test was the second most common reason for denial. So far, Wells Fargo has reported fewer than 20,000 denials.

A total of 168,708 homeowners were in permanent modifications as of Feb. 28, up from 116,297 reported last month. That’s out of an estimated 3.4 million mortgages that may be eligible for the program, according to the Treasury’s latest data (PDF).

About 1.1 million homeowners have begun trials. The average homeowner in the program has been saving $518.88 each month, says Treasury.

See our detailed breakdown of the new numbers here.