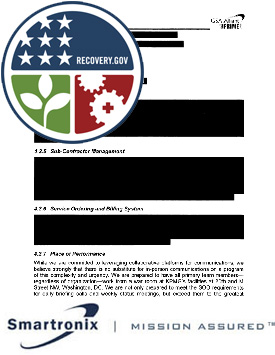 Last month, we reported that the Obama administration had released a heavily redacted version of its $18 million contract for redesigning Recovery.gov, the Web site that’s key to the administration’s pledge on stimulus transparency. ProPublica was among several groups that first filed a request under the Freedom of Information Act to get a copy of the contract, and when we saw how much information had been blacked out—25 of 59 pages were redacted completely—we filed an appeal to have more of the contract released.

This week, we got some company in our request. OMB Watch, a government transparency group, announced today that it has filed an appeal (PDF) as well. “The extensive redactions of the released contract document appear to extend outside of the specific category of proprietary information, confidential and obtained from a person or business that is covered by under Exemption 4,” writes Craig Jennings, senior policy analyst at OMB Watch. Translation: The rationale for keeping so much of the contract details secret simply doesn’t hold.

FOIA appeal letters aren’t ordinarily known for their wit, but certain passages of OMB Watch’s letter stand out, including this one: “It is unlikely, for example, that the entirety of section 5.0 of the June 26 [contract] document under the label ‘Introduction’ contains only proprietary information.”

We’re still waiting for a response from the General Services Administration, which handled the contract and decided how much of it to make public. But we’ll let you know when we do. In the meantime, the new Recovery.gov is set to launch on Sept. 28, according to Federal Times. We’re looking forward to seeing it.