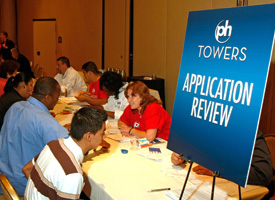 The day's biggest stimulus news is this morning's Labor Department report showing the jobless rate reversed direction last month, falling to 9.4 percent. Moreover, the number of new jobless claims fell in July to 247,000, down from nearly twice that number in June. As The New York Times reports, Jared Bernstein, the top economic adviser to Vice President Biden, claimed that the stimulus is to thank. Republican Rep. John Boehner ignored the dip in unemployment, focusing instead on the 247,000 jobs lost as further proof that "more spending, taxing, and borrowing does not mean more jobs for the American people."

In a zinger, the Associated Press reports that the majority of bridges scheduled for stimulus-funded repairs in Texas don't seem to need it. According to the AP, just 30 of the 77 bridges to be repaired or improved are considered "structurally deficient or functionally obsolete" — categories that would make them eligible for federal repair money. State officials responded that their main concern was to get the money out the door quickly rather than take time planning projects for bridges that need the money more.

The House Committee on Transportation and Infrastructure identified which states are spending their highway stimulus dollars fastest — and slowest. The Christian Science Monitor reports that Wyoming, New Hampshire and Oklahoma top the list for speedy spending, while Florida, Hawaii and South Carolina bring up the rear.

The Washington Examiner published a list of questionable stimulus-funded projects in the D.C. area. They include $500,000 to raise awareness about the importance of trees in D.C., nearly $2 million for energy-efficient garage doors at fire stations and $250,000 to make traffic signs in Montgomery County more fluorescent. Local officials defended the projects.