Following in the steps of Baltimore and Philadelphia, New York City is establishing a committee to review deaths and severe complications related to pregnancy and childbirth, aiming to reduce their toll on expectant and new mothers in the nation’s largest metropolis.

There’s ample room for improvement: The city’s maternal mortality rate is thought to be slightly above average for the U.S., which has the highest such rate in the industrialized world. Of the estimated 700 to 900 deaths related to pregnancy and childbirth nationwide each year, New York City accounts for about 30.

Moreover, the city’s outcomes feature a worsening racial divide. Between 2006 and 2010, black women were 12 times more likely than white women to die from pregnancy-related causes, up from seven times more likely between 2001 and 2005.

The new committee will dig deeper into each maternal death than has previously been possible and, by mining their causes and circumstances, will guide efforts to prevent such tragedies, city health officials said.

“We want to advocate for quality improvement, not just in the city [overall], but in all the hospitals in the community,” said Dr. Lorraine Boyd, medical director of the city health department’s Bureau of Maternal, Infant and Reproductive Health. “We want to be able to say that the rates of maternal mortality, that the [racial] gap is closing and that we’ve put programs in place that are going to lead to that.”

The panel (officially named the Maternal Mortality and Morbidity Review Committee, but already nicknamed M3RC) is scheduled to hold its inaugural meeting in early December and convene four times a year thereafter.

It will have up to 45 members, including not only doctors and nurses, but also doulas, midwives and social workers — “people in the community, who can better reflect how women live their lives,” Boyd observed.

Beyond examining maternal deaths, the panel will also compile and analyze data on severe complications experienced by expectant and new mothers. For every death, experts say there are dozens of cases of such complications, affecting more than 50,000 American women each year.

New York state has had a maternal mortality review committee since 2010 that examined cases statewide, including those in the city; the city has also had its own panel to assess death data in aggregate. 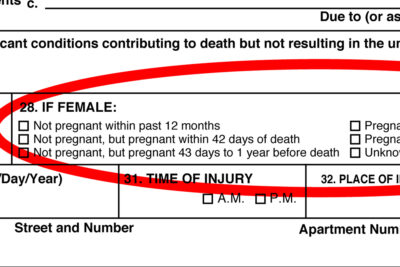 Officials said the city’s new review committee will work hand-in-hand with that of the state, with the city panel reviewing deaths within the five boroughs and the state committee reviewing those outside. The committees will collect a standardized set of data and pool their findings in a statewide report, said Jill Montag, a spokeswoman for the New York State Department of Health.

Beyond its potential to improve outcomes, health officials in New York and beyond said they see the city’s creation of a review committee as a step toward better, more complete data on maternal deaths.

Nationally, such data is so unreliable and incomplete that the United States has not published official annual counts of fatalities or an official maternal mortality rate in a decade.

Unlike the United Kingdom, widely considered the gold standard for maternal mortality data, the U.S. lacks a national system for reviewing pregnancy-related deaths.

Slightly more than half the states and a smattering of cities have active, stable maternal mortality reviews, but many get little or no funding and rely on volunteers to do time-consuming case analyses. Some large states have more deaths to review than one committee can reasonably handle and sometimes skip years or look into subsets of cases rather than reviewing every death.

Adding city committees that can shoulder a portion of the work “makes a lot of sense,” said David Goodman, who oversees maternal health efforts at the Centers for Disease Control and Prevention’s maternal and infant health branch. “The New York City and New York state collaboration is the first we are aware of, and perhaps a model approach for other large states to consider.”

Goodman also leads a privately funded effort to bring together and standardize data from state and local maternal mortality review processes. To do this, the initiative has created a tool, the Maternal Mortality Review Information Application, and New York City and New York state are among 12 jurisdictions nationwide that have begun using it. Another 13 are preparing to do so, Goodman said.

New York City officials said the new committee would be funded partly through a grant but would not specify the funder or the grant amount because the contract isn’t signed yet. Eight staffers at the city health department will work part time on the project, giving it anywhere from 5 percent to 90 percent of their time.

“This is something that we’re committed to, that the city has prioritized, that the health department has committed to fund and to see work,” said Carolina Rodriguez, deputy press secretary for the New York City Department of Health and Mental Hygiene.