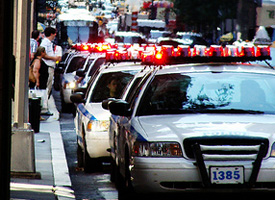 In a reversal, the New York Police Department will now receive stimulus money to pay for officers, the New York Times reports. The city was excluded from a $1 billion stimulus program to help cities hire new police officers or avoid layoffs, because it did not meet the criteria of budget deficits and high crime rates. However, the secretary of the Department of Homeland Security, Janet Napolitano, is set to announce today that the city will receive $35 million for new recruits from another pot of stimulus money, according to the Times. The original decision to exclude the NYPD had been criticized by several high-ranking officials.

The police funding has dominated stimulus news around the country, as local news agencies report how much their police departments received from the fund. Some winners include Baltimore ($10 million), Los Angeles ($16.3 million) and Chicago ($13 million).

The AFL-CIO is pushing for a second round of stimulus spending, reports Workday Minnesota, a Web site that focuses on labor issues. The group’s executive council voted Tuesday for another installment of stimulus. However, Jared Bernstein, economic adviser to Vice President Joe Biden, told the council that it’s too soon to talk about a second package, as the February stimulus money is still being spent and it’s too soon to measure its impact.

The stimulus package has attracted another fraud scheme. The Birmingham Business Journal reports that Alabama Attorney General Troy King is warning consumers of an identity-theft scam with stimulus money as the bait. According to King, individuals claiming to be government workers call people offering a free $1,000 food voucher, only to take their personal and financial information. The Journal reports that the scam has targeted low-income residents around Dothan.

Are you tracking the stimulus? ProPublica has set up a mailing list for reporters covering the stimulus, and you’re welcome to join. You can also help us by signing up for the Stimulus Spot Check, our latest ProPublica Reporting Network initiative.