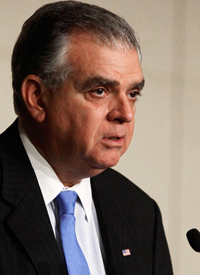 On Wednesday, Secretary of Transportation Ray LaHood delivered his rebuttal to growing Republican criticism over the stimulus before an audience at the Center for National Policy. "LaHood described the $787 billion stimulus package as 'the most sweeping, complex and ambitious domestic aid package we have enacted in generations' and said it already had helped states avoid major service cuts, tax hikes, and widespread layoffs," reports The Washington Post. Here’s a link to LaHood's speech.

Sen. Jon Kyl, R-Ariz., dismissed the stimulus' impact Sunday on ABC News' "This Week with George Stephanopoulos," arguing that "the reality is it hasn't helped yet. Only about 6.8 percent of the money has actually been spent. What I proposed is, after you complete the contracts that are already committed, the things that are in the pipeline, stop it." Evidently Kyl's criticism struck a chord within the Obama administration. Just a day later, ABC News reports, several Cabinet members -- including LaHood, Secretary of Agriculture Tom Vilsack, Secretary of Housing and Urban Development Shaun Donovan and Secretary of the Interior Ken Salazar -- wrote letters to Arizona Gov. Jan Brewer highlighting funds designated for her state. According to Jake Tapper, the message was "put up or shut up."

On Wednesday Treasury Secretary Timothy Geithner met with French Prime Minister Francois Fillon to discuss the global economy and the nations' respective stimulus plans. France's stimulus is much smaller than ours -- $39 billion -- but, as The New York Times reports, government officials quickly spent it on restoring some of France's historic landmarks and beloved castles.

The Lone Star State will not spend any money on road signs promoting the American Recovery and Reinvestment Act, The Dallas Morning News reports.

So much stimulus money -- $4.7 billion -- has been made available for home weatherization, the AP reports, that "it has raised fears of waste and fraud and set off a scramble to find workers and houses for them to repair."

Just a week ago Florida was abuzz over a Palm Beach Post report showing that Floridians receive less stimulus money than residents of any other state -- just $505 per person. Florida Gov. Charlie Crist said Wednesday that the stimulus is working in the state and that it has saved 26,000 teachers' jobs.

Now that Sarah Palin has announced plans to step down as Alaska’s governor, state lawmakers have called a special session in an attempt to override her veto of stimulus money for energy projects, the AP reports.