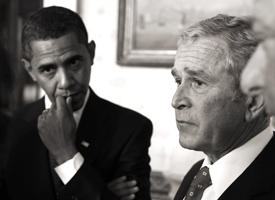 The Washington judge charged with deciding whether four detainees in Afghanistan can have their day in court gave the Obama administration nearly a month (PDF) to distinguish its views on detention from President Bush's. In a court filing Friday, President Obama's lawyers declared that the new policy is the same as the old one (PDF):

This Court's Order of January 22, 2009 invited the Government to inform the Court by February 20, 2009, whether it intends to refine its position on whether the Court has jurisdiction over habeas petitions filed by detainees held at the United States military base in Bagram, Afghanistan. Having considered the matter, the Government adheres to its previously articulated position.

The stance adheres to the Bush administration's theory of a global battlefield, where "enemy combatants" can be detained indefinitely even if they're far away from any traditional battlefield, and even if they're not directly engaged in hostilities. It stretches an argument that Bagram, a military base leased from the Afghan government, is significantly different from Guantanamo, where the Supreme Court determined last summer that habeas corpus applies.

The decision also reaffirms the fears of human rights activists and civil rights lawyers who worry that the new administration's review of terrorism policies will lead to changes only in rhetoric.

Obama signed two executive orders on his second day in office, pledging to close Gitmo's prison within a year and banning torture. But the orders didn't address the broader questions of detention policy that have left the four Bagram prisoners behind bars for years, without due process.

The men are basically the same type of prisoners that stirred up fervor over Gitmo. Unlike most of the 600 inmates at Bagram, who were detained in combat on the battlefield, these four were captured outside of Afghanistan or any other war zone, and they've been in custody for years. One detainee, according to his lawyers, was captured on a business trip in Bangkok.

Observers weren't surprised that the Obama administration hasn't developed a sweeping new policy on combating terrorism in the brief period allotted by the court. Jack Balkin, a Yale law professor, told the New York Times, "It may take some time before we see exactly what is going on -- whether this is just a transitory policy or whether this is really their policy."

However, compared to the tone set by Obama during his campaign, others found room for disappointment. "At a minimum, we were expecting that the Obama administration would say that they are still considering their position and whether or not to change course," Tina Foster, a lawyer for the Bagram detainees, told us.