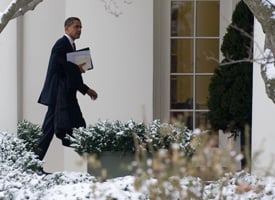 In November 2007, Barack Obama proclaimed that lobbyists "won't find a job in my White House." That eventually became a pledge that they wouldn't "dominate" his administration. And during his transition, Obama put that kinder, gentler pledge into action, allowing lobbyists onboard as long as they worked on issues unrelated to their earlier jobs.

When he got to the White House, he issued an executive order banning lobbyists from working on issues they'd worked on in the past two years. So how's that going? As the National Journal reported, Obama has "nominated two recent lobbyists to high-level administration posts, and 14 of the 112 White House staffers that Obama had named had been registered as lobbyists at some point since 2005." Three more former lobbyists are being considered for top administration jobs.

Lynn has already received a waiver from the Obama administration, and Corr seems likely to receive one with little controversy (especially since few seem to object to an anti-smoking advocate getting a top health job).

As Politico reports, there are actually a number more Obama administration nominees and appointees who have lobbied, though not within the past two years. Obama's nominee to be attorney general, Eric Holder, for instance, was registered to lobby until 2004 and did work for a (now-bankrupt) telecom company. Others lobbied until recently but narrowly miss being constrained by the lobbying rules; Ron Kirk, the nominee for U.S. trade representative, lobbied in Texas, but not on the federal level, and so the rules don't apply.

So what gives? Well, here's what lobbyists have to say about it (from the National Journal piece):

"I applaud Obama for facing the reality that he was going to need people who know how Washington works and some of them might just have been lobbyists," said David Wenhold, president of the American League of Lobbyists and co-founder of Miller/Wenhold Capitol Strategies. "It was great in theory for him to say, 'No lobbyists,' but it simply doesn't work in practice."

In other words, D.C. is crawling with lobbyists, a number of whom have experience working in government. You're going to have to hire some of them. Nanny nanny boo boo.

Whether Obama has pulled something of a bait and switch is subject to debate. Obama's spokesman tells Politico that a few waivers shouldn't obscure Obama's unprecedented effort to "reduce the influence of lobbyists in Washington." If you're looking for a point of comparison to evaluate that claim, none of these pieces count up the number of former lobbyists who held positions in the Bush administration.