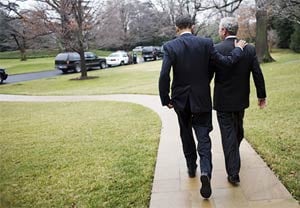 During President Obama’s first days in office, he signaled a quick departure from Bush-era terrorism policies, saying in his inauguration address that Americans would reject "the choice between our safety and our ideals," and on day two, issuing executive orders banning coercive interrogation techniques and promising to close the prison at Guantanamo Bay.

But in the weeks since, the administration has taken a different tack.

Top appointees in legal and intelligence posts have left open doors to President Bush’s policies like extraordinary rendition and state secrets. This morning’s New York Timeslays out the details in a story by Charlie Savage, who won a 2007 Pulitzer for his reports on the Bush administration’s broad interpretation of executive power. Today, Savage explores how new administration officials are clinging to, in many cases, that very interpretation.

The nominee for solicitor general, Elena Kagan, who would be the administration’s representative in Supreme Court cases, said during her confirmation hearing that al-Qaida financiers could be detained indefinitely, regardless of whether they were captured on a battlefield or not. That’s the same position Bush administration had.

A national security law expert, Scott Silliman, told us last month that the above notion — that the "battlefield" has no boundaries — is exactly what’s being tested in one detainee case that’s been put on hold pending a review by the Obama administration. Four prisoners detained at Bagram Air Base in Afghanistan who were captured in places like Dubai and Bangkok, while not engaged in hostilities, are attempting to appeal their off-battlefield detentions.

Meanwhile, as we reported last week, the CIA still refuses to release details of its former interrogation techniques, citing national security concerns, even though those techniques are now banned.

Leon Panetta, Obama’s pick to head the CIA, also said during congressional testimony that the CIA will probably continue "transferring" prisoners to third-party nations for detention or interrogation. The practice was the subject of one of the many secret legal memos that we catalogued last month. The memos describe the Bush administration’s legal views on interrogation, detainee treatment, and other practices of the war on terror.

With some human rights advocates charging that Obama is risking a "Bush redux," current administration officials emphasized to the Times that the policies are still under review and that dramatic changes need to be balanced with national security interests.

"The president is very sympathetic to those who want to find out what happened," Gregory Craig, the top White House lawyer told the Times, referring to a court case the former administration buried. "But he is also mindful as president of the United States not to do anything that would undermine or weaken the institution of the presidency."