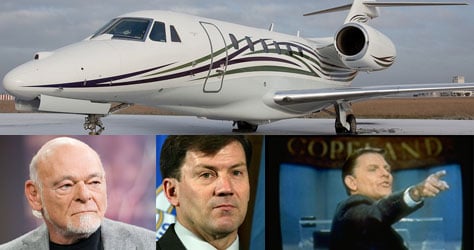 Televangelist Kenneth Copeland faced a congressional inquiry after flying his ministry’s tax-exempt jet to Maui and the Fiji Islands.

South Dakota Gov. Mike Rounds has been questioned about his use of state planes for political and personal trips.

And after getting a $180 billion federal bailout, the insurance giant AIG caught flak for its fleet of corporate jets.

To prevent the public from seeing where they fly, all have over the years turned to a little-known program that lets private plane owners block their flights from view in the government’s system for tracking air traffic.

The owners don’t have to meet any test to keep their flights secret. They merely submit a request to the National Business Aviation Association, a trade group that lobbied to set up the program on the grounds that secrecy is justified to protect business deals and the security of executives.

Blocking Flights: How It Works

But in at least some cases, the program has also served as a refuge for plane owners who’ve faced bad publicity, according to a review by ProPublica of 1,100 blocked planes in the program. The list was obtained after a 15-month public records battle in which the business aviation group sued the FAA to keep it confidential.

After a federal judge ruled that the records are public, the FAA provided the list this week.

It includes aircraft registered to Fortune 500 companies such as 3M and Tyson Foods, private real estate developers, government agencies and evangelical churches. There are 62 Gulfstream IVs and Vs, which cost tens of millions of dollars each, 36 Learjets and two Boeing 737s.

Get ProPublica's Top Stories and Major Investigations Delivered to Your Inbox

Use of the national airspace is generally considered public information because pilots – whether airline captains or recreational fliers – rely on a system of air traffic controllers, radars, runways and taxiways, lighting systems and towers that are all paid for or subsidized by taxpayers.

As a result, flight data collected by the FAA in its air traffic control system – except for military and sensitive government flights – is public information. Web sites such as FlightAware post the data online, allowing anyone to observe the system and follow most planes virtually in real time.

Chuck Collins, who has studied (PDF) the costs of private jet travel for the progressive Institute for Policy Studies, said the public has a right to monitor such flights because taxpayers and commercial passengers heavily support business aviation.

“It’s the use of the public commons,” he said. “It belongs to all of us. It’s not a private preserve. It’s not a country club.”

Dan Hubbard, spokesman for the business aviation association, which helps to administer the program, called the Block Aircraft Registration Request program, or BARR, said privacy is important because businesses worry that competitors could watch them, potentially disclosing deals that could move stock prices.

“Our members tell NBAA that there are certain circumstances where there is a security concern, and that’s why they want to avail themselves of the BARR program,” he said. The program drew attention in November 2008 after the Big Three auto executives were criticized for taking corporate jets to ask Congress for financial help, prompting General Motors to block its flights.

FAA blocks planes at no charge and without requiring owners to prove why their movements should be kept secret. The agency keeps only the current month’s block list and deletes historical records, which prevents the public from knowing who has used the program in the past.

The origins of the block program trace to 1995, when flight-tracking Web sites began to proliferate. Several private plane groups petitioned the FAA to limit release of the data to a need-to-know basis. The groups lobbied Congress, and in 2000, a measure was attached to an FAA reauthorization bill requiring Web sites that use the data to hide any aircraft upon FAA request.

Laura Brown, a spokeswoman for the FAA, said the agency doesn’t have the resources to evaluate the block requests and, because the business aviation association is receiving the requests, allows it to gather the information for the FAA.

In some cases, records and news accounts show that aircraft owners flew into some public relations turbulence.

In 2007, Sen. Charles Grassley, the top Republican on the finance committee, opened an inquiry into several tax-exempt ministries, questioning whether charitable donations had paid for mansions, Rolls Royces and private jets.

Televangelist Copeland and his Eagle Mountain International Church in Newark, Texas, were questioned about layovers of church aircraft in Maui, Fiji and Honolulu. The church told Grassley the Fiji trip was for preaching and the others so the pilots could rest. The ministry’s Web site says the planes are used for humanitarian missions and to spread the word of God around the world.

The church has five planes on the blocked list, including a $17 million Cessna Citation X. Also blocked is a 1953 North American T-28B Trojan, a vintage warplane registered to Copeland.

The ministry and Copeland declined to respond to ProPublica’s questions.

In September 2005, the use of state planes by South Dakota governor, Rounds, was the subject of a three-part series in the Sioux Falls Argus Leader, which found that he had flown to Republican Party functions and his sons’ high school basketball games. Two state planes are on the block list.

Rounds, a pilot who sometimes flies himself, has advocated using state planes to save drive time and money. Col. Dan Mosteller, superintendent of South Dakota’s Highway Patrol, said he decided to block the flights to protect the governor after a routine security review.

“All the other things that go on with the governor’s office, that’s irrelevant to me,” he said. “My only goal is for security reasons.”

He said the blocking request was made on March 30, 2006. That was the same day Rounds announced his re-election campaign.

South Dakota isn’t the only government entity on the block list. The New Mexico Department of Public Safety, which handles flights for Gov. Bill Richardson, and the Alabama Department of Transportation also have blocked their planes.

The use of corporate jets stoked the anger of the public and even President Obama in the wake of the 2008 financial crisis and government bailout as banks continued to buy planes and fly executives to resorts and vacation homes.

Firms such as AIG decided to sell aircraft and cancel purchases of new ones. AIG spokesman Mark Herr said in an e-mail that AIG blocked its aircraft years before the meltdown.

“It’s been AIG’s historical practice going back years to not disclose its aircraft identifiers to the general public,” Herr said. “In light of the surge in numbers and intensity of the threats directed at the physical safety of our employees, it’s only common sense to continue this practice.”

The private jet has always been an emblem in a long-running dispute about whether general aviation – the class that includes corporate jets, recreational fliers, helicopters and charters – pays its fair share in support of the nation’s air traffic system.

According to an FAA study released in 2007, general aviation uses 16 percent of the air traffic system , yet pays only 3 percent of the taxes that support it. The rest is covered largely by commercial travel. The system, including salaries for traffic controllers, costs about $9 billion a year.

The association’s president, Ed Bolen, said the group’s members are rigorous in evaluating the costs of corporate jet travel versus driving or taking commercial airlines. But often, the need to fly to multiple cities in one day, the lack of airline service to some areas or the proprietary nature of business discussions necessitates the use of company planes.

Confrontation on a landing strip

One pilot who asked not to be identified for personal security reasons said he blocked his plane after he and a female companion were stalked by a man who had been tracking their flights.

According to the account, which ProPublica verified with the local sheriff, the stalker showed up at the pilot’s private airstrip and confronted them as soon as they landed from a trip out of town.

“The only possible way he could have followed us there was to use that tracking software,” the pilot said. “I run around with folks all the time who fly corporate jets and they have very, very good reasons” for privacy “because there are some screwballs in the world.”

Gannett Co., the media company that owns USA Today, which published a version of this article in collaboration with ProPublica, has blocked its corporate jet.

Company spokeswoman Robin Pence said Gannett shields its flights mostly for competitive reasons, such as when it looks at possible acquisitions and investments. Security in a post-9/11 environment also is a concern, she said.

A spokeswoman for Zell, the Tribune Co. chairman, declined to comment. Thompson Lang, publisher of the Albuquerque Journal, said the company’s jet has been used to ferry reporters to news events like Hurricane Katrina. But Lang said he plans to take it off the block list.

The reason: Lang doesn’t want the governor or others to be able to hide their flights, so why should he?