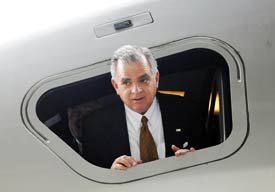 * Mayor Roy Buol of Dubuque, Iowa, says that mayors are "trading tactics on how to secure money from the federal stimulus package" at the annual U.S. Conference of Mayors, reports Matt Kelley of Radio Iowa. In a recent interview with U.S. News and World Report,Secretary of Transportation Ray LaHood -- perhaps you know him as the 'Roads Warrior' -- disclosed that mayors "were concerned money was going to go through the states. But what's happened is they've worked with the states, and they've been able to get a pretty good chunk of money to fix up roads." States designed portfolios of stimulus projects that optimize job creation, according to interviews with state DOTs conducted by about 20 members of ProPublica's Reporting Network. "In Metropolitan Atlanta, we could have spent all the money on three or four projects, but we needed to get more mid- to small-size projects and spread them out across the state," explained Georgia DOT spokesman David Spears. "We could create more jobs instead of doing one or two mega-projects." Well, if Mayor Buol is right, it looks like mayors are gearing up for the second round of stimulus transportation projects, all of which need to be approved by March 2, 2010.

* Back in April, the Ohio governor and state transportation officials enraged some shovel-ready constituents by announcing that $57 million in stimulus funds would go toward studies and designs for future transportation projects that would not actually break ground for years. Apparently, the federal government agreed with some of the local criticism. The Ohio Department of Transportation issued a press release yesterday touting stimulus investments, but noting that the $57 million planned for studies and design would instead go toward shorter-term projects aimed at quickly creating construction jobs. According to the release: "While agreeing that [studies and design projects] are eligible for funding under the Recovery Act, the Federal Highway Administration (FHWA) and the US Department of Transportation expressed a preference that stimulus funds be directed toward construction-ready projects."

* Florida will experience a longer, tougher recession than most states, according to a recent report by Wachovia Economics Group. Its construction employment dropped almost 20 percent last year. Unemployment may rise to 11 percent. What's fascinating about this West Palm Beach News article detailing Florida's high unemployment and sizeable layoffs is what's missing: There's no talk of how the stimulus may help Florida's economy.

* The Justice Department allotted $136 million in stimulus funds to California law enforcement. Its agencies "plan to use the money to reduce the flow of illegal drugs," reports the AP.