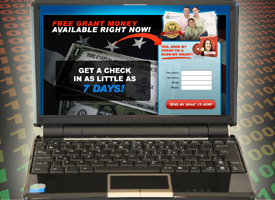 *If by free you mean for the low, low price of $90 per month. Oh, and there is no such grant program in the stimulus package.

Because those are the terms being offered by stimulusgrants.com, one of many Web sites that have popped up to take advantage of the stimulus dream: that piles of free government money are headed your way. (No, we're not linking to them.)

When it comes to taking advantage of that dream, "unfortunately it's taken scam artists no time at all," said Eileen Harrington, acting director of the Federal Trade Commission's Bureau of Consumer Protection, at a news conference Wednesday morning.

At stimulusgrants.com, testimonials promise money to help with making mortgage payments, starting a business or paying for college. The only cost, they say, is a couple dollars to process your application. But clicking on a tiny link at the bottom of the screen marked "terms" reveals a different story: When you hand over your credit card information, you become a recurring member in three different sites, and unless you go through the complicated disenrollment process, it will cost you more than $1,000 per year.

"We're not a scam in any way," said a customer service supervisor at the company's 1-888 number who would only give his first name as Keith. "Our business is very legit."

Further calls inquiring what exactly one does get for that $1,000 were not immediately returned.

That site and others like it bear all the marks of legitimacy, some including the CNN and NBC logos and astounding testimonials from members.

"When the recession hit it took its toll on me and more importantly my family. I took matters into my own hands and figured out a way to get through these tough times," says Rob Anderson, who identifies himself as a firefighter from Texas who got a $12,000 check, at presidentobamagrants.com, a site singled out as problematic by the FTC.

There is also a sister approach, said the FTC's Harrington: e-mails that promise consumers stimulus money in exchange for their Social Security number and banking information.

What consumers who take this bait don't know is that there is no program in the stimulus that requires a grant application, and getting a list of legitimate federal grant programs is free at www.grants.gov.

The FTC has already contacted Facebook, where links to many of the sites have already appeared, Harrington said. The social networking site -- which was apparently already aware of the problem -- immediately took steps to remove the ads.

The commission has also contacted Google, which promised to investigate, she said. "As we stand here talking, we are already following up on that offer and expect swift results."

In response to our inquiry about what steps it has taken, Google sent us the following e-mail:

"Our AdWords Content Policy does not permit ads for sites that make false claims, and we investigate and remove any ads that violate our policies. We have discussed these issues with the Federal Trade Commission and reaffirmed our commitment to protecting users from scam ads."

But what about the folks who run these sites? Clearly it is illegal to steal someone's personal information by e-mail, but what about a Web site where the terms are available, just hidden?

Apparently the official phrase is "deceptive, negative option offer," and the FTC has won cases ordering perpetrators to pay back victims in such schemes before.

Consumers who feel they have been taken advantage of can file a report at www.ftc.gov.