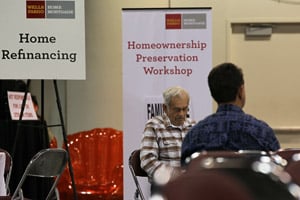 When the administration launched its foreclosure prevention program, it committed to spend up to $75 billion. By the end of March, more than a year later, only about $242 million had actually been paid out.

That number is sure to rise, but it's a testament to how slowly the program has progressed. The low total is a direct result of the low number of permanent mortgage modifications so far: 228,000 as of the end of March. About 1.2 million homeowners have begun trial modifications, but many have been stranded in the trials for longer than the three months they were designed to last. About 158,000 have been dropped from the program, either because they couldn't make the payments or because of disqualification.

The program provides incentives to mortgage servicers, investors, and homeowners to encourage modifications to more affordable monthly mortgage payments -- but those incentives are paid out only when a modification becomes permanent.

The $242 million paid out as of the end of March came from a variety of sources. The Treasury Department itself had paid $91 million in incentive payments, while the now government-owned Fannie Mae had paid $116 million and Freddie Mac $35 million, according to the companies' securities filings.

The Treasury funds come from the TARP bailout, of which $50 billion was originally set aside for this program. Fannie and Freddie have agreed to pay out the incentives related to loans that they own or guarantee, a toll that Treasury estimated at $25 billion. That's how we get to $75 billion.

(Of course, Fannie and Freddie can make those payments only because of the support of the U.S. government. Their bailout toll recently rose to $145 billion. So, really, all of it is ultimately coming from the taxpayer.)

A report (PDF) last month by the special inspector general for the TARP said that about $68.4 million of the $91 million paid out so far under the TARP has gone to servicers, the banks and other companies that collect mortgage payments and handle modifications. (Bank of America, Chase Home Finance, and Wells Fargo are the largest.) The remainder of the money paid out went to investors: either a lending institution or investors in mortgage-backed securities. All of the funds paid by Fannie and Freddie have gone to servicers, because Fannie or Freddie own or guarantee the loans.

The program has a system of incentive payments (PDF). Servicers receive $1,000 immediately for completing each permanent modification, while Treasury compensates the investor for part of the payment reduction.

The government's spending on the program is sure to rise for a number of reasons. The first is that some of the incentives are paid over time. For instance, the program also provides up to $5,000 in incentives to the homeowner, none of which have been paid out yet. If the homeowner remains current on the modified loan, the Treasury (or Fannie or Freddie) will pay to reduce the homeowner's outstanding principal by $1,000 at the end of each year for five years.

The Treasury has also recently signed up servicers for two other programs. One will pay incentives to lower homeowners' payments on second mortgages. The other offers incentives for servicers to execute "foreclosure alternatives" like a short sale (allowing the homeowner to sell the house for less than the outstanding mortgage amount). It remains to be seen how successful those initiatives will be.