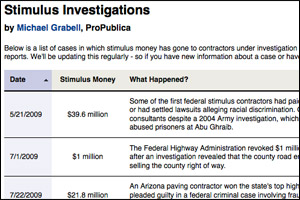 With the anniversary of the stimulus upon us, politicians are likely to bombard us with numbers: 1.5 million to 2 million jobs created or saved, about $300 billion out the door, some $150 billion in the pipeline. The Democratic Policy Committee keeps a list of success stories while Sen. Tom Coburn, R-Okla., has published tworeports of 100 "wasteful" projects.

One number that's been especially hard to pin down: the cost of waste, fraud and abuse.

Already there have been scattered reports about stimulus contractors that are under investigation or that have had serious violations in their past. Using estimates from fraud experts, the government's stimulus watchdog, Earl Devaney, has said as much as $55 billion could be lost.

But no one knows for sure. So to get at the big picture, we at ProPublica decided to start tracking inspector general reports, auditor investigations and news accounts about questionable contractors. We'll be updating our stimulus investigations list regularly -- so if you have new information about a case or one we should add, e-mail it to [email protected].